We all need to ask ourselves how we ever wound up with elected leaders with such poor judgment as to destroy our economy for no real reason. Some of the problem include being poorly informed by listening to the Mass Hysteria Media and relying on ineffective billionaire designed social organizing tools like Facebook. But what is really broken is our entire corrupt election process. We do not have a democracy. Instead our elections more resemble a bidding war between various groups of wealthy billionaires using bought off corrupt politicians. As long as they were not actually destroying the economy, such a corrupt system might be tolerated. But the day has arrived where this election fraud process cannot be ignored anymore. We are now at the crossroads of history. If our kids are to have any chance at a better future, we simply must reform the election process to give challengers at least some change of winning an election against a corrupt entrenched incumbent. 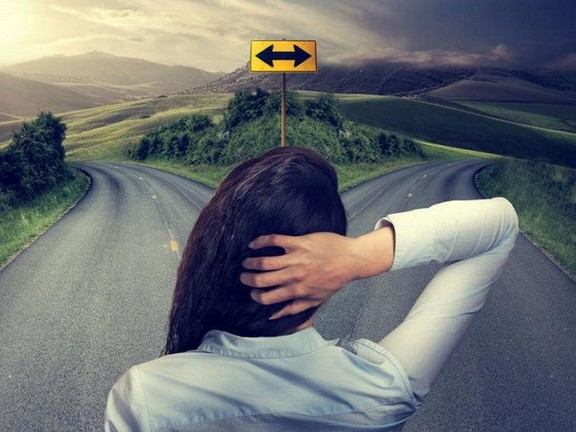 In this article, we will discuss options for reforming our elections.

Understanding the Problem
Sadly, we currently have an election system in which elections for public offices are often sold to the highest bidders – who then reward their campaign donors with an elaborate and illegal system of bribes and kickbacks. For example, in the last 5 years alone, the 200 most politically active companies in the US spent $5.8 billion influencing our government with lobbying and campaign contributions (aka bribes). Those same companies got $4.4 trillion in taxpayer kickbacks – a return of 750 dollars in kickbacks for every dollar spent bribing politicians. 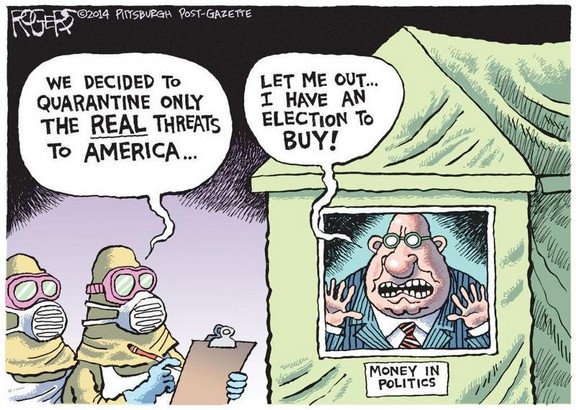 There are national organizations trying to reform our broken political system by passing election reform laws. The most prominent of these is the excellent group Represent.Us. Here is a link to their website: https://represent.us/

While this is a worthy effort, it is very difficult to reform elections on a national level because the election laws and problems are different in each state. Also, Congress is perhaps the most corrupt of all branches of government.

I therefore do not think the election fraud problem can be solved on a national level until it is first solved on a local level.

The Solution is to Change Local and State Election Laws

Thankfully, we in Washington state have the power of initiative. This means that instead of trying to convince corrupt legislators to pass a law ending their gravy train, we can go around the legislature and directly to the people of Washington to pass an Initiative to reform our election system. 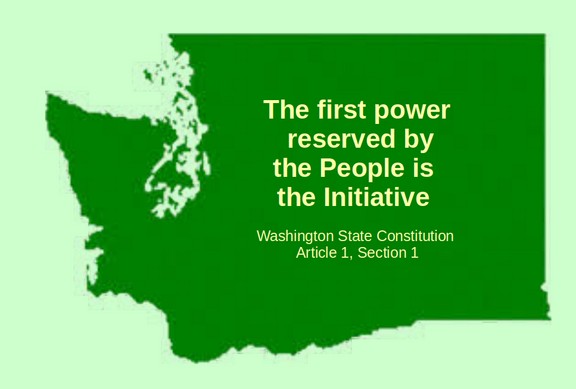 It is more important and effective to organize at the local level around local issues rather than the national level around national issues. Our energies and time are best spent organizing community groups in every city and every school district where we can meet directly with our neighbors to discuss our local problems and solutions. This is the best way to get around the current polarization of our two party system. This is particularly true here in Washington state where our current election system is clearly a violation of several sections of the Washington state constitution.

For example, Article I Section 19, FREEDOM OF ELECTIONS, states: “All Elections shall be free and equal.” 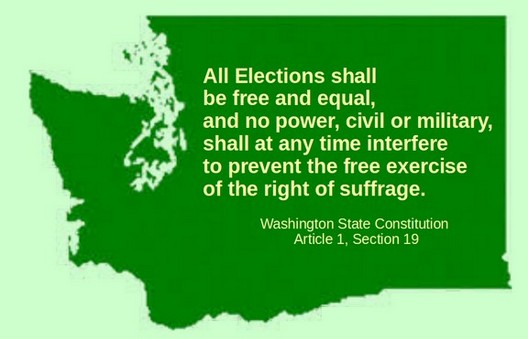 This means that all elections should be conducted in a free and equal manner. In addition, Article II, Section 28 states: 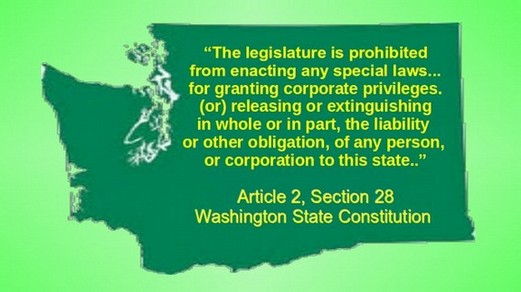 Here is another provision: SECTION 12 SPECIAL PRIVILEGES AND IMMUNITIES PROHIBITED. No law shall be passed granting to any citizen, class of citizens, or corporation other than municipal, privileges or immunities which upon the same terms shall not equally belong to all citizens or corporations. 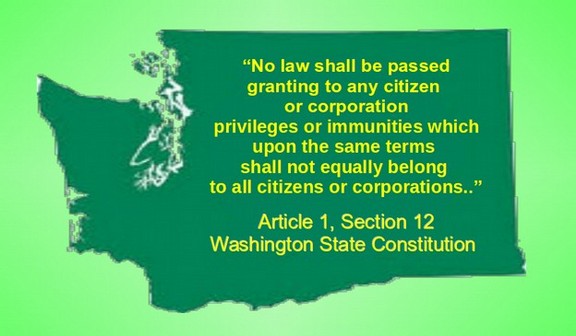 This means that passing special laws giving tax breaks to wealthy multinational corporations is contrary to the Washington state constitution. Yet despite this fact, our legislature has passed nearly 700 tax breaks for wealthy corporations – totally about $30 billion per year – more than the rest of the state budget combined! 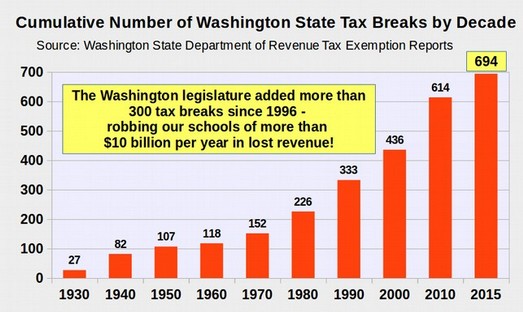 Here is another section of the Washington state constitution being violated by our current election bribery and kickback schemes.

Article 2, SECTION 30 BRIBERY OR CORRUPT SOLICITATION states:"The offense of corrupt solicitation of members of the legislature, or of public officers of the state or any municipal division thereof, and any occupation or practice of solicitation of such members or officers to influence their official action, shall be defined by law, and shall be punished by fine and imprisonment." 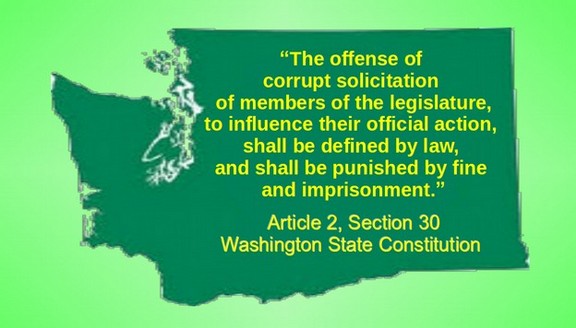 Here is another clause of the Washington State Constitution requiring a uniform system of state taxes. This is also being violated by the billions in tax breaks for the wealthy corporations that are currently buying and controlling our elections: Article 7, Section 1 of our state constitution states: "The power of taxation shall never be suspended, surrendered or contracted away. All taxes shall be uniform upon the same class of property within the territorial limits of the authority levying the tax and shall be levied and collected for public purposes only."

Why Ending Corporate Welfare is Required by the Washington State Constitution
No other state in the nation grants tax breaks to wealthy corporations to the extent that the Washington legislature has granted tax breaks to wealthy corporations. The total is now more than $36 billion per year. In granting 700 tax exemptions, some of which apply to only a single corporation, such as Microsoft or Boeing, our state legislature has created laws that clearly violate the uniformity clause of Article 7, Section 1 of our State Constitution. Elections should not be about who can afford to hire the most campaign consultants but who has the best ideas.

In order to increase awareness of the broken election system in Washington state and organize a group of concerned citizens, we have started the following website: restorefairelections.org

We are just getting started, but we plan to build a version of “Our Community Network” on this website to help people reach out to other people in their local community to build support for a Fair Elections Initiative. To have a reasonable chance of passing such an initiative, we will need at least 10,000 active supporters from across Washington state.

Here are several specific election reform issues we want to address:
1. Restore the Secret Ballot
2. Stop Political Bribery..End corporations buying elections.
3. End Illegal Kickbacks (aka Corporate Welfare)
4. Bring back the Fairness Doctrine so all candidates are given equal space in any political articles published by the Mass Hysteria Media.
5. End Gerrymandering.
6. Stop rewarding politicians from lying about their opponents.
7. Eliminate barriers that make it all but impossible for a normal person to run and win an election. For example, PDC filing requirements need to be greatly reduced for minor campaigns.
8. Increase Voters guide statements for all state races to 500 words.
9. Require and promote public debates before primaries and general elections at every major high school in our state.
10. Split Legislative Districts into two Representative Districts (as required by our state constitution).

In fact, every one of these ideas is about restoring the original intent of the drafters of the Washington State Constitution that our government should consist of citizen legislators rather than full time politicians. It will likely take a great deal of time and effort to build a large enough coalition to put a Fair Election Initiative on the ballot. But the latest actions of crazy government officials will hopefully convince folks of the need to reform the election process here in Washington state. In the meantime, my advice is this: Stop voting for any incumbent politician who supported shutting down small businesses here in Washington state. This has never happened before in the history of our state and we need to take action to make sure it will never happen again.

What’s Next?
In the final section of our book, we will look at changes that need to be made to our education system so that future generations make better decisions than our current government officials have made.