8.3 Lost Public Services… Harm to Support for our Public Schools

What will happen to school funding after billions of dollars are slashed from state revenue due to the business shutdown?

As we noted earlier, in 2019, Washington state total tax revenue was about $23 billion. 70% of this revenue was from the sales tax and Business and Occupation tax. Thus, $16 billion in annual state revenue comes from sales and business taxes. A 25% drop in retail sales will blow a $4 billion hole in the annual state budget. It is nearly certain that retail sales will plunge by much more than 20% -resulting in a loss of between 40,000 to 80,000 jobs in the coming months.

Because school funding is about half of the state budget, up to half of those job losses could be public school teachers and other public school employees – resulting in huge increases in class sizes – at a time when Washington state students are already subjected to among the highest class sizes in the nation.

In this section, we will look at how shutting down our state economy will harm our schools financially – and thereby inflict further harm on our students. This huge financial blow comes at a time when hundreds of school districts in our state were already facing massive budget deficits for the coming school years.

For those who may not have been paying attention, our current Superintendent of Public Instruction Chris Reykdal was directly responsible for creating these massive budget deficits. First, in 2017, Reykdal helped pass a fake school funding bill that robbed school districts in King and Snohomish counties of billions of Levy dollars and transferred these funds to the State general fund were they were used for other purposes. I wrote about this scam right after the bill passed in an article called Broken Promises, Shell Games and Poison Pills.

Here is a link to that article.

As bad as the Reykdal fake school funding bill was, in the coming two years, he managed to do something even worse. His bill contained a “double taxation year” in 2018 where the new state school property tax was imposed in addition to the old local levy tax. This double taxation year artificially and temporarily increases school district funding for that one year.

Reykdal then falsely told teachers that there was “plenty of money” in school district budgets – causing teachers in school districts across the state to demand and get pay raises (which were really just cost of living adjustments) of about 10%.

Of course, because there was no real actual increase in school funding, all of these school districts now face budget shortfalls that will require firing teachers in coming years to offset the pay raise – leading to even more class size increases. So thanks to Reykdal, the entire school funding situation in Washington state was already a disaster even before he and Jay Inslee shut down all of the schools and businesses in our state.

Here is what this budget shortfall looked like for the Everett School District: 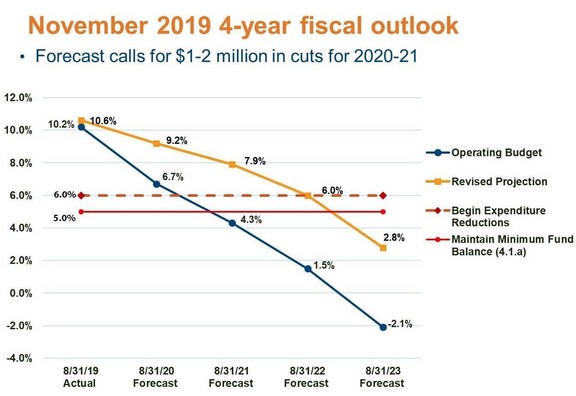 Here is what it looked like for the Tacoma School District

Note that 2020 revenue will be 16 million less than 2017 revenue. Now the question is what will happen to school funding after billions of dollars are slashed from state revenue thanks to the 2020 business shutdown? Because collections of state sales and business taxes are delayed by 30 to 60 days, we will not see the March shortfall until May and the April Shortfall until June. It is likely that Governor Inslee will have to call a special session of the legislature in June to address the billions in cuts that will be needed.

Will 2020 be the Gap Year for all College Students?
In a survey of college officials, more than half of 210 respondents said they are talking about the possibility of putting the fall semester entirely online, according to the American Association of Collegiate Registrars and Admissions Officers.

Many high school seniors are likely to not even sign up for classes if they think that all they will get is online courses taught by a robot. Here is what one college instructor is telling students:

“I would tell kids: Number one, the likelihood of having face-to-face classes in September is pretty darn small,” said Scott White, a retired guidance director for more than 20 years at Montclair High School in New Jersey. Referring to Covid-19’s risk to older people, he said: “You’re not going to get 65-year-old college professors going in.”

Another consultant said “empty dorms is what kills colleges” — precisely the state of things at institutions across the nation at least through summer. https://www.zerohedge.com/economics/hit-huge-colleges-brace-fatal-blow-next-fall-face-face-instruction-uncertain

Here is what another college professor said: “This is a message to all high school seniors (and their parents). If you were planning to enroll in college next fall — don’t. If there’s anything worse than resigning yourself to a freshman year spent online, it would be moving across country or across town, into a dorm room or an apartment — only to have to move out weeks or months later, with no guarantee of any refund, with further disruption and dislocation.”

“Minimum class sizes will go up. Many classes that “migrated” online as an emergency measure in March 2020 may never come back. Faculty members forced to teach this way may find themselves required to go on doing so — regardless of whether they were ever trained to teach effectively online.”

These Budget Cuts are Not the Fault of a Virus – they are the fault of Government Officials Needlessly Shutting Down State Businesses!
What I want you to remember is that these cuts will NOT be due to the corona virus. They will be due to the needless shutdown of our state economy created by Jay Inslee and Chris Reykdal believing a ridiculously bad report written by a discredited hack in the UK.

What’s Next?
In the next section, we will explain why orders to shut down schools and businesses violates our Constitutional rights.