4.2 How our Immune System Evolved to Fight Viruses

Why are you so fearful, you of little faith?
Book of Matthew, Chapter 8 Verse 26

We humans are exposed to millions of bacteria and viruses every day. Yet somehow we have managed to survive – whether we use social distancing or not. How do we survive all of these constant attacks?

One answer is that we actually have deadly viruses inside of us all the time. For example, in 2014 researchers from Washington University in St. Louis found that our bodies are home to an average of five virus families responsible for numerous illnesses. The researchers identified adenoviruses – responsible for viral pneumonia and the common cold – in the majority of samples. https://www.medicalnewstoday.com/articles/282751

So the notion that we “catch” the flu or “catch” a cold from someone else is not entirely accurate. It is likely that we already have bad viruses inside of us. But most of the time our immune system is able to fight these viruses off. So when we do get sick, it could just as easily be because our immune system was not working as well as it was the day before.

Here is a diagram showing how our immune system learns how to fight viruses by being exposed to viruses: 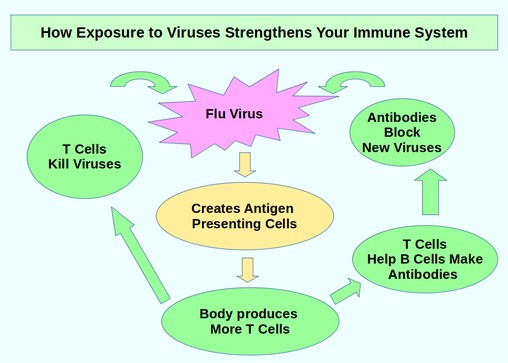 Exposure to viruses stimulates the immune system and makes it stronger. Exposure is like exercise for your immune system.

Social isolation prevents your immune system from working properly. It is like when you sit on the couch too much watching TV, it is not good for your body because your body was made to exercise. Your body falls apart if you do not do some exercise from time to time. In the same way, if you do not expose your immune system, it also will fall apart.

500 Years of Flu Epidemics
The truth is that human immune systems have been fighting off viruses for thousands of years. As the following table shows, there are new flu outbreaks about every 10 years for the past 500 years.

This pattern of rising and falling in the US (and in China) is nearly the same pattern experienced by flu outbreaks for the past 500 years – whether people are isolated or not. Severe Flu Pandemics occurred in 1510, 1580, 1781, 1831, 1890 and 1918 or about every 100 years. The word “severe” seems to mean that the flu was so wide spread that it affected every family with about 20% of the population getting the flu and up to one percent of the population dying from the flu. The reason flu viruses infect only 25% of the population - even though the entire population is exposed to it – is because 75% of the population has some sort of immunity to it. This was true even during the 1918 Spanish Flu epidemic. Most people exposed to that flu did not get sick at all - or they had very mild symptoms. The reason social isolation laws do not work is because they fail to understand how viruses are transmitted and fail to understand the role of the human immune system in protecting us from viruses.

How does our immune system get better?
Ironically, too much cleanliness is actually bad for our immune system. This may seem hard to understand but recent research has found evidence that too much cleanliness is linked with poorer immune systems. Called the hygiene hypothesis, living in more sterile environments can lead to higher rates of illness as our bodies become less familiar with everyday grime. For instance, scientists in Germany found children exposed to farm animals (and the associated bacteria and other microbes hiding out there) were about half as likely as other children to develop the autoimmune illness Crohn's disease. https://www.livescience.com/16787-germs-everyday-surfaces-infographic.html

A study published in 2009 in the journal Proceedings of the Royal Society Biological Sciences, found that exposing kids to common everyday bacteria and microbes may play a helpful role in the development of the body's inflammatory systems, which plays a crucial role in the immune system's fight against infection.

More to the point, studies of the 1918 Spanish Flu found that cities who engaged in social distancing often succeeded in delaying the number of flu infections and deaths – only to see a second spike two months later after the social restrictions were lifted. The reason for the second spike in cities that mandated extreme social isolation was that people did not get immunity to the flu the first time around. I am going on record right now to predict that the same double spike will occur here in Washington state because the government shutdown of schools and businesses is preventing people from developing their natural immunity. If we really wanted to help people, instead of isolating them and shutting down schools and businesses, the state should offer everyone some free Vitamin C and D supplements.