Adding in the young children not yet in school brings the total number of homeless children in Washington state to about 85,000 children.

One million lost jobs will mean one million families will no longer be able to pay their rent or mortgage – leading to a huge explosion in homelessness. According to the Mortgage Bankers Association, the number of homeowners failing to make their payments grew by a factor of 10 in the month of March. https://www.mba.org/2020-press-releases/april/mba-survey-shows-spike-in-loans-in-forbearance-servicer-call-volume

Federally backed mortgage loan payment failures grew even more – to 4.25 percent in March. 4% of $600 billion in federally insured home loans means that $24 billion in homes might default in the next few months if extreme social distancing policies are continued. Unfortunately, this is just the beginning. According to Moody’s Analytics, as many as 30% of homeowners - about 15 million households - could stop paying their mortgages if the US economy remains closed through the summer or beyond. 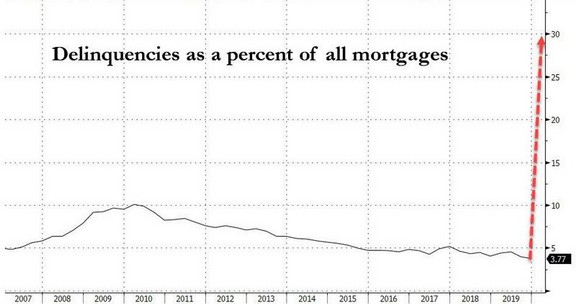 The situation is even worse for renters. According to the National Multifamily Housing Council, over 30% of US Renters didn't pay April Apartment rent!
https://www.zerohedge.com/economics/over-30-us-renters-didnt-pay-april-apartment-rent

More than half of renters say they lost jobs due to corona virus: ‘They could face housing situations that spiral out of control’. More than half (53.5%) of renters reported that they lost their job due to the measures introduced in their town or city due to the COVID-19 pandemic, concluded a survey of 5,000 renters and 5,000 landlords by Avail, an online resource for landlords.

Almost half (46%) of renters say they have less than $500 in emergency funds, according to a separate poll of 1,000 renters from Clever, a service connecting house hunters with real-estate agents.

“Low-income renters — many of whom work in service industries hit hard by the pandemic shutdown — are at high risk for eviction and homelessness during shelter-in-place measures,” according to a report by Mary Cunningham, a fellow at the Urban Institute. The recent $2 trillion CARES Act, “didn’t do enough to address increases in housing insecurity for the nearly 11 million low-income renter households paying more than half their income toward rent before the pandemic,” Cunningham added.

The Child Homelessness Crisis in Washington State is about to get much worse
Child homelessness was already at record levels here in Washington state even before the shutdown of our economy. How can a child be expected to complete their homework when they do not even have a home?  As a person with a Master's Degree in Education, I know all too well that it is not possible to provide an education to a child if they are moving from place to place or living in the back of a car. Maslow's Hierarchy of Needs demonstrates that food and shelter are basic human needs while education only happens after these basic needs are met. I therefore am certain that providing homes to all children is an essential component of making ample provision for the education of all children.

The largest increase in students experiencing homelessness occurred with those who are unsheltered, which includes students living in parks, abandoned buildings, cars, or on the streets.

Homeless children go hungry at twice the rate of other children, get sick four times more often, and are three times more likely to suffer from emotional and behavioral problems compared to children who live in stable housing. The consequences of homelessness can be devastating and long-lasting for young children. By age 8, one in three homeless children has a mental health problem.
Many students living in shelters or doubled-up housing stay there for more than one year. About two-thirds of students living in a shelter in 2013-14 had been in that same situation for at least one of the previous three school years. 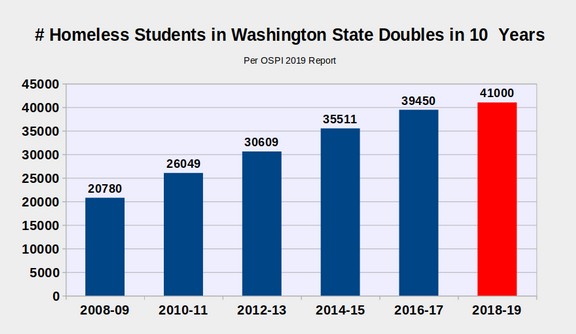 However, this report greatly underestimates the true number of homeless children in our state for several reasons. First, it does not include young children who are not yet in school. Since these are about one quarter of all children, the total number of homeless students is greater than 60,000. Second, many families do not want to admit that they are homeless. Third, the definition of homeless is very vague. Should it include a family living in someone's basement?
Or a family that moves from apartment to apartment because they cannot afford the rent?
A more accurate estimate of child homelessness was determined by a 2013 study from the National Poverty Center. Using family income and a category called "Extreme Family Poverty," which they define as making less than $2 per day per person. These are households with children who are living with virtually no income. They also used a term called Deep Poverty which is half of the normal poverty rate. These are the poorest of the poor families living in the US. Here is a quote from their study: "We estimate that in mid-2011, 1.65 million households with 3.55 million children were living in extreme poverty in a given month, based on cash income. This constituted 4.3 percent of all households with children... The prevalence of extreme poverty rose sharply between 1996 and 2011, with the highest growth found among groups most affected by the 1996 welfare reform act."
http://npc.umich.edu/publications/u/2013-06-npc-working-paper.pdf

What about the bill passed by the legislature to "help" homeless children?
Washington state receives about $950,000 per year from the federal government to help homeless students. With more than 85,000 homeless children, this comes to about $12 per child per year. In other words, this is a fake program which offers no help at all to homeless children. Sadly, so is the State bill that just past the legislature. Legislators claim that the 2016 supplemental budget included $15 million for aiding youth homelessness. But House Bill 1682 is a fake bill and and insult to the serious problems facing homeless children. We have more than 85,000 homeless youth in Washington state. So $15 million for youth homelessness boils down to $200 per homeless child or less than one dollar a day per homeless child. This is not enough to buy the child a cheese burger - much less a permanent and stable home. But the reality is that all this Homeless Kids Bill really does is pay for more administrators to count the homeless kids. And the real amount of money in the supplemental budget - just $2 million per biennium or $1 million per year. While this does "double the amount" given by the federal government, all it really does is pay for more administrators. The additional $12 per homeless child per year does not ever get to the homeless child. The homeless kids will not even get a piece of gum.

Who voted for this fake Homeless Kids bill?
Because it does not really do anything but sounds really good, the bill got a lot of support including Reykdal both sponsoring and voting for the fake bill. With one million additional people losing their jobs, the number of homeless children will rise above 100,000 – one in every 10 kids in our public schools.