7.1 Children do NOT Transmit the Corona Virus!

There has not been a single case of a child infecting an adult with the corona virus anywhere in the world!

Let’s take closing schools as an example of why extreme social isolation does not work. Even states and nations that refused to shut down all businesses agreed to close their schools for a few weeks. This is because schools are a major transmission path for the seasonal flu. But historically, we only closed down a school when the school itself was having a flu epidemic. 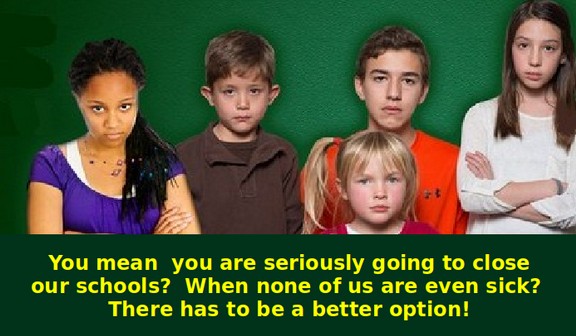 For example, just before the elementary school I was working at was shutdown in March, one of my students, a 10 year old child, came to school crying because someone told him he cannot see his grandparents any more because he might kill them. The issue was that this child lived with the grandparents because this child had no real parents. Can you see how much harm was inflicted on this child?

I was therefore not surprised when, on April 22, 2020, a 45 page study was published in the UK by the Royal College of Paediatrics and Child Health concluding that children do not pose a significant threat of transmitting the corona virus to adults. Here is a link to this very important study: https://dontforgetthebubbles.com/wp-content/uploads/2020/04/COVID-data-top-10.pdf

The researchers reviewed all 78 scientific studies on this subject – studies from countries around the world. They found that the infection rate in children under the age of 10 was extremely low. More important, they found that there was not a single reported case of a child under the age of 10 transmitting the virus to any adult – anywhere in the world! The report then included links to all 78 studies and summaries of all of these studies.

At the very least, this study confirms that there is no risk at all either to children or to adults of opening back up every elementary school in the nation.

I also believe we should open up the middle schools and high schools. But the study did not address the question of transmission rates in older children. So next, we will look at other studies to analyze that question.

It is pretty obvious that the closure did not effect the total number of infections.

Here is a quote from the conclusions of the study: “The results of this current study revealed that it is not necessary to implement school closure in an influenza outbreak. The effectiveness of school closure for 1, 2, or 3 weeks was worse than no intervention, with similar Transmission Rates but longer period of time to the end of the epidemic. Moreover, the school curriculum would be disrupted by the prolonged closure, and families would be burdened with the care of their children and any resultant educational problems. In conclusion, isolation, as a single intervention, was the most effective in terms of reducing the total attack rate and the duration of the influenza outbreak in schools.” https://journals.sagepub.com/doi/10.1177/0300060518764268

The next study was a study of interventions in an elementary school in Pennsylvania during the 2009 Swine Flu Epidemic. This study found that the greatest transmission rates occurred between students that were in the same class and that were the same gender. There appears to be “incidents” of infection that may have occurred outside of the classroom – for example, by boys playing ball together on the playground or sitting in close proximity in the school cafeteria during lunch or sharing snacks. 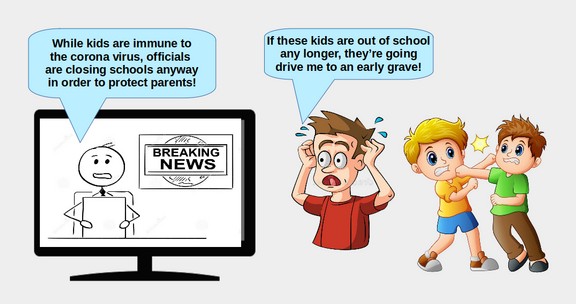 Surprisingly, sitting next to a sick child in a classroom was not found to significantly increase the risk of transmission. However, the highest transmission rates occurred outside of school and were in households with more than one child. School closure was found to have no effect on the transmission rate, total illnesses or length of epidemic.

Health Drawbacks of Closing Schools
When we close schools, poor students may not get enough to eat. Schools have responded to this problem with a “Grab and Go” program where folks can drive up to a central location and grab a meal to go. The problem with this plan is that many poor kids and their parents do not have access to a car to go get the meal. Thus, many poor kids will still go hungry. This in turn harms their immune system making them more likely not only to get corona virus but also get sick from the normal flu that is likely to already be inside of them.

King County Health Officials Seem to Have Been Aware of the Drawbacks of Closing Schools
On March 4, 2020, Patty Hayes, Director of Public Health for Seattle and King County gave a press conference in which she seemed to be aware that closing schools had no advantages and many drawbacks. https://www.seattleweekly.com/news/we-will-get-through-this-officials-discuss-coronavirus-at-wednesday-press-conference/

Here is what she said: Patty Hayes, director of Public Health — Seattle & King County, shared measures meant to slow the spread of the virus. She clarified that the measures are recommendations rather than mandates. It is being advised that people determined to be vulnerable (e.g., compromised immune systems, those 60 and over, those with underlying medical conditions) try to stay home and keep away from large groups as much as possible.

Officials are still advocating against school closures. Children, unless with a compromised immune system, have not been shown to be an especially at-risk group. Additionally, it has been found that during past pandemics, such as the H1N1 outbreak of 2009, school closures resulted in more disruption.

Patty expanded on these comments in an article published in the LA Times on March 6, 2020: “Keeping children out of school could increase the risk that they would infect older people, who are far more vulnerable to the virus. When we close a school, children have to go somewhere. So if you think about families, who often are the caregivers, it might be grandma, grandpa and elderly members of the family, the exact people that we’re concerned about.”

“Officials learned the disadvantages of closing schools during the H1N1 swine flu pandemic a decade ago. We closed schools during H1N1 and we saw tremendous community disruption. During that outbreak in 2009-10, officials found that keeping children out of school meant that many parents, including health workers needed to care for patients, had to stay home.”

A few days after making these comments, the Washington State Superintendent of Public Instruction decided to close every school in the state – including closing schools that did not have a single case of the corona virus. The schools in Washington state have been closed ever since – severely harming more than one million children and their families.

What’s Next?
The Superintendent’s new plan is to convert all the schools into online programs. In the next section, we will present evidence that his new plan is doomed to failure – further harming our kids and their families.