Plasma Antibody treatment has been known about and used for more than a century.

Here is a treatment chart of what doctors around the world are currently using to treat corona virus victims:

You can see from the above list that the plasma antibody treatment option is not very popular right now. But I am more concerned with what will actually work than in what is most popular.

We have said many times that 99.9 percent of all victims recover from the corona virus. How they recover is that their body produces a bunch of antibodies which seek out and kill the corona viruses. These antibodies are present in the blood and can be extracted and administered to others with the virus. Theoretically, even those in serious conditions and with poor immune systems ought to be helped by getting these antibodies. Here we will look at evidence to see whether this method really works.

“We explore the feasibility of convalescent plasma (CP) transfusion to rescue severe patients. The results from 10 severe adult cases showed that one dose (200 mL) of CP significantly increased or maintain the neutralizing antibodies at a high level, leading to disappearance of the corona virus in 7 days with rapid improvement in 3 days. These results indicate that CP can serve as a promising rescue option for severe COVID-19.”

There are three things I like about this study. First, this method was able to help severe cases – the ones that really need help. Second, all ten people were helped. Third, 200 mL is a pretty small amount – about one cup. So this is not an impossible amount. Nor should it be prohibitively expensive.

Obviously, ten people is a pretty small number and more testing is needed. But hospitals are set up to take blood and give blood. They do it all the time. The study included a comparison group of 10 people who had nearly identical symptoms to the 10 that received Plasma Antibody Treatment. In the comparison group, three died, six took much longer to recover and only one had an outcome as good as the Plasma Antibody group.

Plasma Antibody treatment has been known about and used for more than a century.  In the early 20th century, doctors transferred the blood borne antibodies of patients who had recovered from polio, measles, mumps and flu to those who were in still in the grips of those infections. 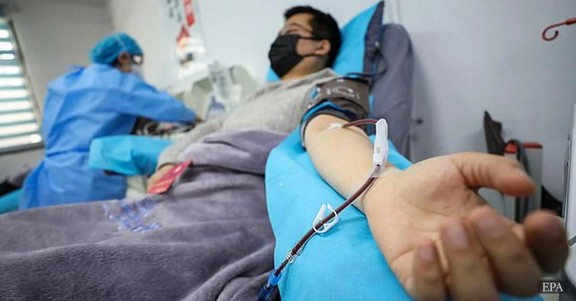 Above is a recovered patient donating blood plasma to help others.

Since the release of this study,  the New York Blood Center (NYBC) has issued an urgent appeal for recovered COVID-19 patients to donate blood plasma for the creation of antibody infusions. The first state blood bank to become a central repository for convalescent plasma, NYBC will collect, process the plasma for infusion, and maintain a bank for hospitals to treat patients with serious or immediately life-threatening COVID-19 infections.

Dozens of community blood centers around the US have also begun gathering blood to create such treatments.

The Mayo Clinic in Rochester, Minn., also has launched a small trial of convalescent plasma as a means of reducing COVID-19 complications.

In my opinion, this approach is a much better and safer and less expensive approach than any of the vaccine or miracle drug options.

What’s Next?
This section completes our chapter on why vaccines and miracle cures do not work. In the next chapter, we will look at research on the drawbacks of closing our public schools.