Those who received flu shots were at a 36% higher risk of having the corona virus than those who were not vaccinated.

On January 10, 2020, the US Department of Defense published a study analyzing the effect of annual flu shots on US soldiers. The study found that for the 2017 – 2018 flu season, those who received flu shots were at a 36% higher risk of having the corona virus than those who were not vaccinated. The reason for this was “virus interference” which in plain English means that the flu shot prevents people from developing natural immunity to other viruses.

Here are some quotes from the study: “Vaccinated individuals may be at increased risk for other respiratory viruses because they do not receive immunity associated with natural infection… 4041 out of 11,943 specimens tested positive for influenza (34%). There were 3869 specimens identified as other respiratory pathogens (32%). The remaining 4033 specimens resulted as negative (34%).”

This study was also important because it supports my estimate that during any given winter, about 33% of people get the flu. https://www.sciencedirect.com/science/article/pii/S0264410X19313647?via%3Dihub

The Long History of Flu Virus Vaccine Failures
For more than 70 years (since 1945), US taxpayers have given billions of dollars to drug companies with the promise that drug companies would be able to develop a vaccine which could protect us from the seasonal flu. In 1947, researchers were shocked to discover that the flu vaccine they created in 1945 was no longer effective. https://www.cdc.gov/flu/pandemic-resources/pandemic-timeline-1930-and-beyond.htm

Thus began the annual battle to create a new flu vaccine every year in order to provide some protection from the previous years flu strains. Bivalent vaccines were produced to protect against two flu strains. Trivalent was then produced to defend against three strains. All we got for our time and money was more resistant flu strains. And of course, the drug companies feeding us these empty promises and snake oil cures got billions of dollars. 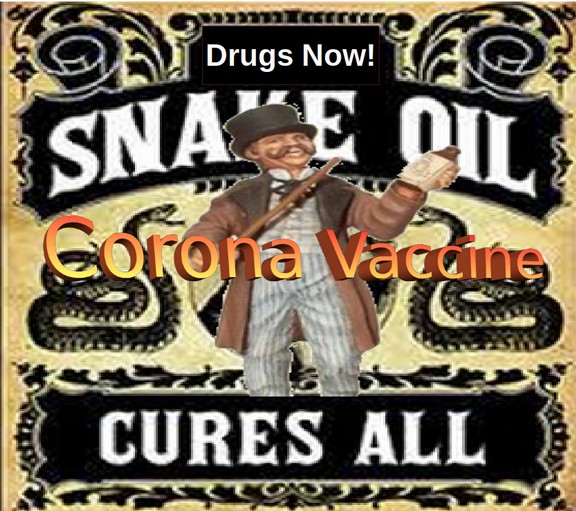 In 1957, when the “Asian” flu pandemic materialized, production of a vaccine against this pandemic influenza strain was initiated. Approximately 40 million doses of the vaccine were administered to people in the US. However, due to the lack of effectiveness, public health officials reported that “the vaccine had no appreciable effect on the trend of the pandemic”. https://www.nvic.org/vaccines-and-diseases/influenza/vaccine-history.aspx

Yet, despite several studies demonstrating that flu vaccines were ineffective, government vaccine policy for annual flu shots continued. Things got much worse in the 1970’s as gene splicing and genetic reassortment opened up a Pandora’s box of new vaccines – using Frankenstein genes that never existed in nature. In 1976, drug companies began rumors that the Spanish Flu of 1918 was about to re-appear. Congress immediately gave the drug companies $137 million to produce a new vaccine. But the drug companies also insisted on a law protecting them from liability should the new vaccine kill anyone. That is “confidence in your product.” In October 1976, the flu vaccination program began. Within two weeks, three senior citizens died from taking the vaccine. Many others became permanently paralyzed from a “side effect” called GBS. It turned out that the Spanish Flu did not actually re-appear. But the drug companies had learned a vital lesson about how to scare the

American people in order to get a boat load of money from Congress. https://academic.oup.com/jid/article/176/Supplement_1/S69/952964

As viruses became more resistant, the dosage was increased from one dose to two. If lack of effectiveness was not bad enough, many people were severely harmed and killed by vaccines. This led many parents to sue drug companies over harm that vaccines inflicted on babies – leading to the 1986 law banning lawsuits against drug companies making vaccines. Ironically, this law was called the National Childhood Vaccine Injury Act.

By the 1980s. so many parents were suing drug companies for vaccine damage to their babies that drug companies threatened to stop making vaccines. In passing the Vaccine Injury Act and preventing all lawsuits against drug companies which made vaccines, Congress let these parents know what really mattered was not protecting children but protecting the profits of drug companies. As time went on, flu viruses became even more resistant and vaccine doses went up and up just as the drug company profits went up.

On April 26, 2009, US public health officials declared a national public health emergency after the discovery of a new flu strain. A new flu vaccine was quickly licensed and made available to the public. But a 2011 study of the effectiveness of the 2009 pandemic swine flu vaccine found it had an overall effectiveness of only 56 percent. The same study found that the vaccine was not effective at all in seniors – which were the main group the vaccine was intended for. https://journals.plos.org/plosone/article?id=10.1371/journal.pone.0023085

By 2010, things were so bad that drug companies moved to high-dose vaccines such as Fluzone – a vaccine which had four times the amount of vaccine as the prior versions. In 2013, the FDA approved FluBlok which was a trivalent vaccine using special recombinant “designer” genes with a threefold jump in the amount of vaccine . This vaccine was so powerful (or so deadly) that it was only recommended for ages 18 to 49 – no seniors allowed!

In 2014, the CDC approved a spray vaccine called Flu Mist for children between 2 and 8 years old. However, in June 2016, the CDC had to pull Flu Mist off the market after a study showed that the vaccine was completely ineffective in preventing the flu. https://www.deseret.com/2016/6/22/20491719/ouch-flu-spray-fails-again-panel-urges-shot-instead

Other than fake science paid for by corrupt drug companies, there is very little scientific research that flu vaccines have a significant effect in reducing flu fatalities. Since 2004, seasonal flu vaccine have failed to prevent flu in vaccinated persons more than half the time. The average effectiveness of influenza vaccines over more than one dozen flu seasons has been less than 41 percent. https://www.cdc.gov/flu/vaccines-work/past-seasons-estimates.html

Here is a table of vaccine effectiveness from 2015 to 2019 which shows that since 2014, the average effectiveness of flu vaccines has actually gone down to 38%: 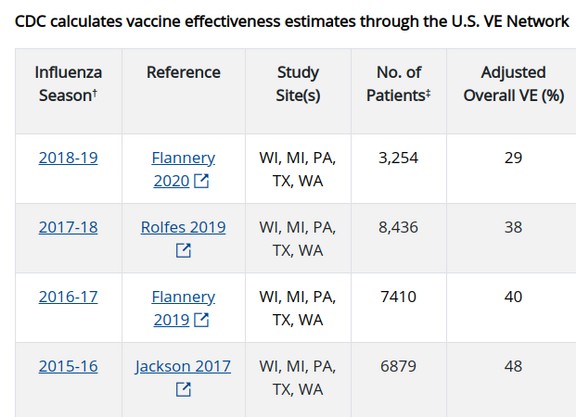 In summary, the Flu Vaccine industry has to be the only industry in the world that has been in existence for more than 70 years without ever producing an effective product. It is so bad in terms of harming its victims that the only way it can stay in business is by being exempted from lawsuits by an act of the US Congress.

Given their shocking annual failures for more than 70 years, why should anyone of us ever believe that they will be able to discover an effective vaccine for the corona virus in the next year??? Anyone who claims that this is going to happen is either corrupt or simply does not know what they are talking about.

Still thinking about taking the corona virus vaccine when it comes out? Then get ready for the Vampire Vaccines!
In an earlier chapter, we went over the unique structure of the corona virus. Remember all of those big spikes on the outside of the virus? Well, those spikes are being targeted by some of the new vaccines coming out next year.

Naturally, the drug companies are using recombinant DNA to create these new Vampire Vaccines. These new DNA vaccines will contain genetically modified messenger-RNA, which will turn your body into a mini factory to churn out the protein contained in those bumps, in an attempt to jump start your immune system. https://www.sciencemag.org/news/2017/02/mysterious-2-billion-biotech-revealing-secrets-behind-its-new-drugs-and-vaccines

Here is a quote from the article:

“The single-stranded molecule sets up a temporary protein factory outside a cell's nucleus. It would allow scientists to deliver proteins that act inside cells or span their membranes, which are a challenge to introduce from the outside. If you can hack the rules of RNA, essentially the entire kingdom of life is available for you to play with."

Their plan is to inject all of us with genetically modified genes which will have the ability to invade our blood cells and set up their own RNA gene factories inside of our blood cells – permanently altering the genetic makeup of its victims. Once you get your vampire vaccine, you will be giving a Certificate allowing you to go back to work or school. What could possibly go wrong with that plan??? In case you are not aware, there have been huge problems with genetically modified organisms over the years. For example, the first attempts to genetically modify wheat ended abruptly after a researcher showed that genetically altered wheat could kill children.  http://www.panna.org/sites/default/files/GMO_Myths_and_Truths_1.3.pdf

What is the Real Goal of Vaccinating Everyone with a GMO Super Vaccine?
The Gates Foundation has for 20 years carried out massive vaccination programs on children in Africa. In 2014 and 2015 Kenya carried out a massive tetanus vaccination program, sponsored by WHO and UNICEF. The Government administered a vaccine of tetanus toxoid impregnated with beta human chorionic gonadotropin (BhCG). This toxic mix of drugs causes permanent infertility among a half million girls and women between the ages 14 and 49. If a vaccine can be implanted with a sterilization agent, any other health or DNA affecting molecule or protein can be put into a vaccination cocktail. (See these references Kenya: Thousands infertile after govt-sponsored vaccination and “Mass Sterilization”: Kenyan Doctors Find Anti-fertility Agent in UN Tetanus Vaccine?

Of course, the previous vaccines also could cause death in children, so the new Vampire Vaccines are perhaps just more of the same.

What’s Next?
Now that we know there is no hope for a miracle vaccine, in the next section, we will look at some options for a miracle drug treatment cure. But first this important message from our Mass Hysterical Media: 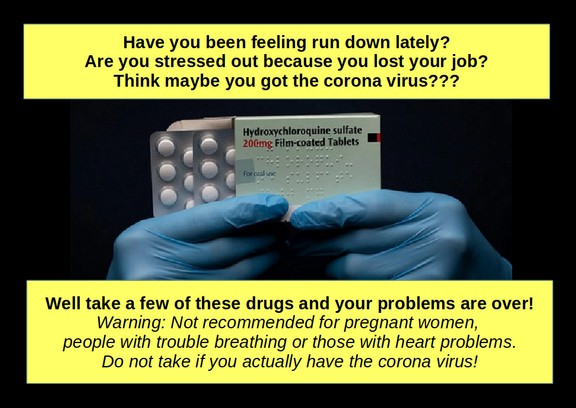 We now return you to your regular programming. If you still think you will be saved by some miracle drugs, then keep reading - because I apparently haven’t got the message across yet that there are no miracle cures.