1.2 Why the Cure is will Kill More People than the Disease

People under 65 have about the same risk of dying in a car accident as they do of dying from the corona virus. Dr. John Ioannidis, Stanford Prevention Research Center

Hundreds of millions of adults and children in the US have been confined to their homes for months on end because they have been told this will help them save their grandparents from a deadly virus. 60 million or more bread winners have already or will soon lose their jobs and likely their homes in what is the largest social isolation experiment in human history. Millions more lost their life savings and are facing poverty. In a later chapter, we will look at research on why social isolation does nothing to reduce viral fatalities. Here we will look at the fatal consequences of extreme social isolation compared to the much less lethal harm of the corona virus. 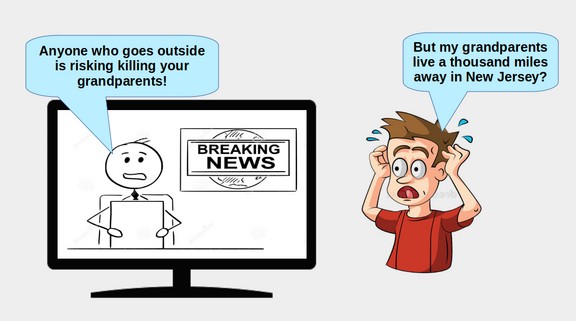 From the day we are born, we face a 100% risk of dying at some point in the future. Even our beloved parents and grandparents will not live forever. This is why we should spend our time wisely and productively – and live each day actively working in the real world to benefit and serve those we love – not hiding in our bedroom watching the Mass Hysteria media. 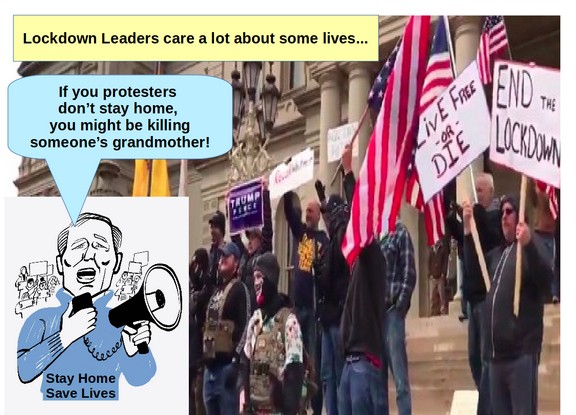 But what lockdown advocates ignore is that locking people in their homes and shutting down 15 million small businesses in the US for months on end – causing 60 million to lose their jobs - will kill 10 times more people than were killed by the corona virus. 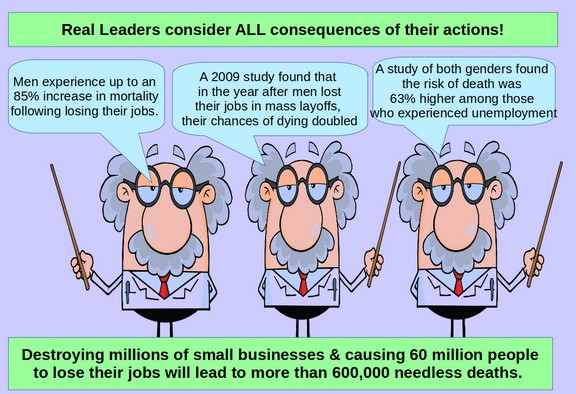 A leading analyst of this question is Dr. David Katz, a nutrition and preventive medicine expert from Yale University. Here is a link to his website which has a ton of information and research on the drawbacks of shutting down the economy and why it does more harm than good. https://davidkatzmd.com/coronavirus-information-and-resources/

Dr. Katz did an interview on April 14, 2020 explaining his position. Here is a link to the transcript if you prefer to read it. https://ratical.org/PerspectivesOnPandemic-III.html

Here are some quotes which summarize his position, which he calls Total Harm Minimization: “If we leave people to shelter in place with anxiety uncertainty, dread and doubt, we are going to propagate an epidemic of mental health decline. There will be depression and anxiety and some people will turn to substance abuse.”

“We don’t shut society down because there are risks out there, risks of car crashes, the risks of death from the flu, the risks of other infectious disease, all sorts of risks we encounter every day…. Herd immunity is something we have to talk about because it is the more proximal alternative to an all-clear. It’s the way we can go back to the world. The dose of exposure does seem to correlate with the severity of the disease. So, if you’re exposed to a relatively smaller number of viral particles, you’ll get infection, but basically at a level where your immune system can keep up better. “

What is the risk of death from the corona virus compared to other causes of death?
As I write this article, on April 29 2020, there are claimed to be about 62,000 deaths in the US from the corona virus. To see the current number of fatalities, go to this website. Then click on Corona virus updates: https://www.worldometers.info/

It is likely that corona virus will only be one percent of the 8 million US annual fatalities. If people want to actually reduce fatalities, they should be focusing on reducing heart attacks, cancer, car accidents, lung disease and suicides. Here is a graph of the above rates: 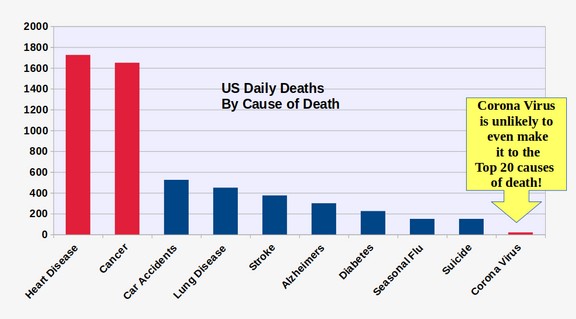 Influenza Fatalities as a Percent of all Fatalities in the US
The following web page has a weekly analysis of corona virus fatalities as a percent of total US weekly fatalities.
https://www.cdc.gov/coronavirus/2019-ncov/covid-data/covidview/index.html#mortality

Scroll down the page and you will see this chart of the past several years of flu fatalities. This chart was last updated on April 9, 2020: 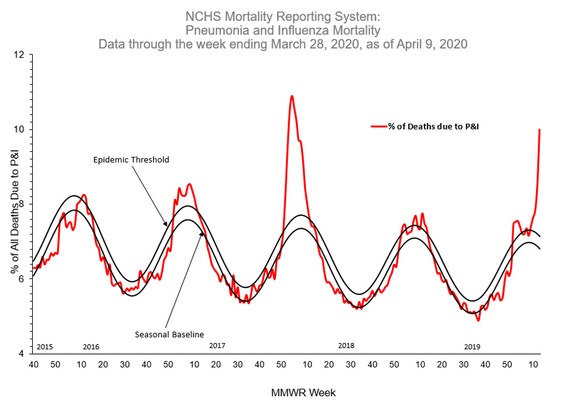 The red line is the percent of weekly fatalities due to Pneumonia and Influenza (called P and I). These are combined because the actual cause of death is Pneumonia – but what caused the Pneumonia was Influenza. In the winter of 2017-18, P and I accounted for 11 percent of all fatalities during the third week in January. In the first week of April, 2020, P and I (including both the normal seasonal flu and the corona virus flu) accounted for 10 percent of all weekly fatalities. 7 percent of this 10 percent was attributed to the corona virus. Do you recall reading about the flu being 11% of all deaths in January 2018? How about the fact that 61,000 people died fro the seasonal flu that winter? Neither do I.

Here is a quote from the above page: “CDC does not know exactly how many people die from seasonal flu each year.

What is likely to occur as a result of 60 million lost jobs due to extreme social isolation policies is that locking everyone into their homes? Here is one study that measured how harmful it can be for a person to lose their job: Clemens, et al, What is the effect of unemployment on all-cause mortality?. 2015

Men experience up to an 85% increased risk of all-cause mortality following losing their jobs.

Assuming an equal number of men and women lose their jobs, we can calculate the total annual mortality rate for men to be about one percent times 40 million equals 400,000. Multiply this times 85% means that about 350,000 additional men will die each year as a result of 60 million additional unemployed. Add in 150,000 women and the total is about 500,000 additional fatalities.

There are many pathways these 500,000 jobless people might perish. Below we will look at just four of these pathways:

#1 Death from Loss of Health Care

#1 Death from Loss of Health Care
Because the US is the only country in the world where health insurance is tied to having a job, the loss of 80 million jobs could also mean that 80 million people will lose their health insurance. This is in addition to the 45 million Americans who currently do not have adequate health insurance. A 2009 Harvard study found that the 45 million uninsured Americans had an annual death rate that was 45,000 fatalities higher than those who were insured. Therefore adding another 80 million to the ranks of the uninsured would result in about 80,000 additional fatalities per year. http://www.pnhp.org/excessdeaths/health-insurance-and-mortality-in-US-adults.pdf

#2 Death from Increased Cardiovascular Disease and Strokes
The loss of 80 million jobs will also increase several of the leading causes of death in the US - including heart disease, cancer, stroke and suicide - by amounts that vastly out-number any reduction in corona virus fatalities due to the extreme social isolation policies advocated by our current government officials.

For example, it is possible that locking people in their homes and forcing them to listen to Corona Virus Hysteria on the TV all day long day after day for two to three months or more could increase heart disease and strokes by 10%. Since over 2,000 people a day die from these two causes even during good times, an additional 10% would be 200 added deaths per day. Multiply 200 times 60 days and the result is 12,000 more people die a needless death.

#3 Death from Increased Suicides
Another major danger from collapsing the economy is the increase in suicides that will result from millions of people losing their jobs and their homes. According to a study published in the American Journal of Public Health, April 2011, historically, the average rate of suicides in the US has been 12 per 100,000 population per year. In 1932, the suicide rate rose to 22 per 100,000. This was an increase of 10 suicides per 100,000 compared to the historical average.

Add 33,000 suicide deaths to the 60,000 uninsured deaths and the 12,000 extra heart attacks and strokes brings the total extra deaths from extreme social isolation policies to 105,000. But even this amount is just the tip of the iceberg.

#4 Death from Increased Alcoholism
Let’s next look at the nation’s largest mental health self-help group, the 12-step program which is more commonly called AA. Before the ban on all public meetings, 1.3 million “official” AA members attended AA meetings once a day to once a week in communities all over America.

For every official member, there are three who attend meetings who are not members – making the total about 4 million. These meetings served a vital purpose in providing social closeness as a way to keep recovering alcohols from backsliding into despair, alcohol and drug abuse. Without these meetings, it is possible that as many as half of these members or two million recovering alcoholics will go off the wagon. This will greatly increase tragedies like drunk driving which is the leading cause of all fatal car accidents. Combine this with other typical tragedies of drug abuse such as spousal abuse, job losses, robberies, burglaries and many other problems and it is possible that total additional fatalities just from this factor could exceed 200,000.

This brings the total up to 305,000. We have not even considered the fatalities resulting from the massive increase in homelessness that is certain to occur when 60 million people lose their jobs. The real death toll from shutting down our economy could well be more than 500,000. Meanwhile, Extreme Social Isolation has never been shown scientifically to reduce fatalities by even a single person.

So those who claim to be “saving lives” with social isolation policies are doing just the opposite – killing people by the thousands. These misguided and corrupt politicians claim to be concerned about saving the lives of our grandparents. But they have failed to consider the lives of thousands of people who will be killed as a direct result of their criminally insane extreme social isolation policies. 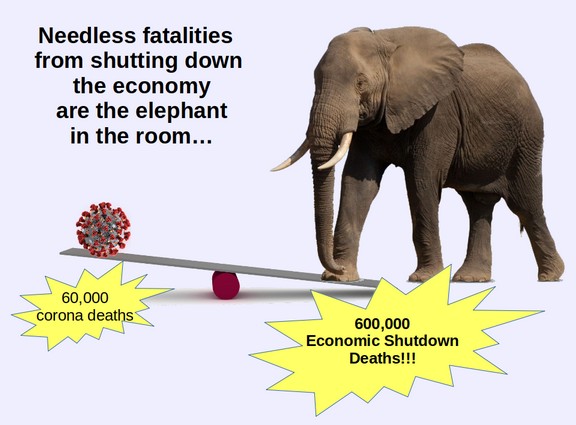 How many people will die from starvation?
Here is a quote from one article claiming this is possible: “Under “normal” circumstances of our globe’s predatory inequality, some 9 million people die annually from hunger and famine-related diseases. This figure may now shoot up exponentially. Maybe into the tens of millions, or more.” https://www.globalresearch.ca/covid-19-cruelty-universal-lockdown/5710798

Additional Research on the Relationship between Social Isolation and Fatalities
Here is a quote from a 2014 Harvard study:

There has long been substantial evidence linking job loss to shorter lives and more health-related problems. A 2009 study on the impact of the 1980s recession in Pennsylvania, found that in the year after men lost their jobs in mass layoffs, their chances of dying doubled.

An analysis of 42 studies on the relationship between job loss and mortality among both genders found that the risk of death was 63% higher among those who experienced unemployment than among those who did not.

Matthew Pantell, MD, Social Isolation: A Predictor of Mortality Comparable to Clinical Risk Factors 2013 Am J Public Health
Social isolation was as strong a factor in mortality risk as smoking, and even higher than having high blood pressure.   https://www.ncbi.nlm.nih.gov/pmc/articles/PMC3871270/

What’s Next?
Now that we have a clearer understanding that the economic shutdown will kill way more people than the corona virus, let’s here from 50 experts – many of whom predicted this would be the case.