The following image is from a study published in the National Academy of Sciences in 2007. Here is a link to this study. https://www.ncbi.nlm.nih.gov/pmc/articles/PMC1849868/

The graph below claims that during the Spanish Flu epidemic of 1918, Philadelphia was a bad city that failed to practice social distancing resulting in the death of 4500 people. Meanwhile, St. Louis was a good city that “listened to health experts and told people to keep their distance from one another and avoid public places.” 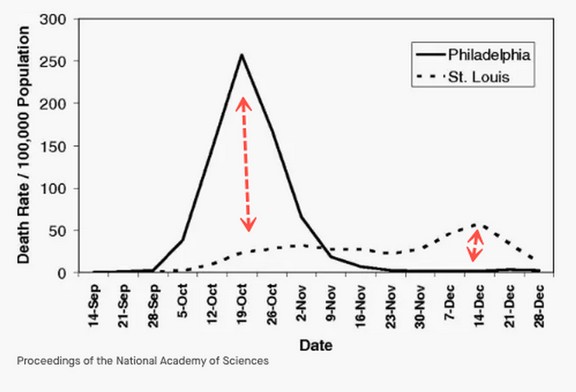 The above graph is extremely misleading. The graph was taken from the 2007 Ferguson study of the social isolation actions of 16 cities in the 1918 Spanish Flu epidemic. There was a more complete study of 43 cities published in the Journal of the American Medical Association in August 2007. The study was called: Nonpharmaceutical Interventions Implemented by US Cities During the 1918-1919 Influenza Pandemic. Here is the link: https://jamanetwork.com/journals/jama/fullarticle/208354

Below is the graph for all 43 cities in terms of the social isolation actions they took in 1918 versus the peak weekly death rate: 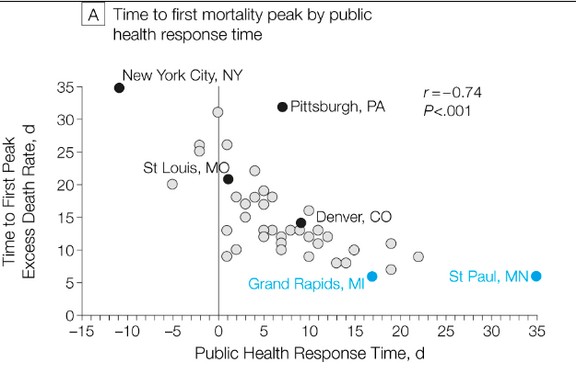 Meanwhile, cities on the right suffered a peak week of fatalities in just 10 days from the first case being reported in that city. Thus, the peak in cases was reached in 3 days after the first reported case. So there appears to be an advantage to social distancing in delaying the time to the peak by about 3 to 4 weeks. But there was a heavy price to pay for this minor delay as is shown on the next chart. 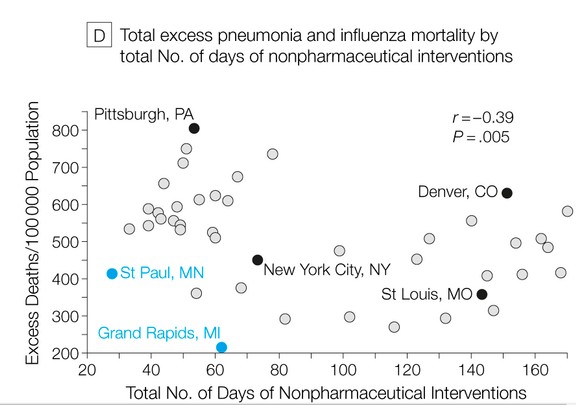 But why were fatalities so high in Pittsburgh and Boston (700 to 800)? The answer is not, as Ferguson would have you believe, that they did not have enough days of interventions. Rather, it was because those two cities had the highest percent of returning soldiers from the end of World War One. The soldiers brought the Spanish Flu home with them. The more infected soldiers came to a town, the more deaths there were from the Spanish Flu. St. Louis was not a good city because it enforced an extended period of extreme social distancing. It was a good city because it had fewer returning soldiers in 1918.

As we noted earlier, the Spanish Flu was 200 times worse than the current Corona Virus. In the final months of 1918, it killed nearly 5000 people in Washington state. This was with a state population of 1.3 million. Since the current population is 7.5 million, Washington state would need to suffer nearly 29,000 fatalities to have a comparable outbreak in 2020. The reason the Spanish Flu was many times worse was because the trenches of World War One were extremely unsanitary and filled with exhausted troops with weakened immune systems. These trenches became a massive incubator for the Spanish Flu. When these infected troops returned home, they caused massive outbreaks all across the US.

Given that there is no proven benefit to even one week of extreme social distancing, the closure of schools and businesses in Washington state for 11 weeks is basically a crime against our kids, our jobs, our families, our businesses and our economy.

Our economic problems will only get worse if schools and businesses are closed for a year or longer while our Governor and Superintendent wait for a miracle magic bullet vaccine. 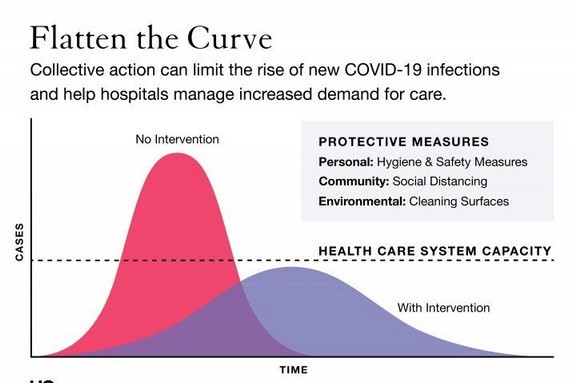 We have already shown that US hospitals were not overwhelmed by the corona virus. In fact, at the peak, they were only at 7% of capacity. Here we will show that even if they were overwhelmed, social isolation would not have reduced the problem because it does not actually flatten the curve.

Sadly, the above chart is worse than misleading – it is a blatant lie. As we have just seen from the 2007 study of 43 cities, social distancing interventions may lengthen the time to the peak week – but social distancing does not shorten the height of the peak week. The chart makes it look like, unless we shut down schools and businesses, the number of cases will double and wipe out the health care system. But here is what actually happened to the “fatalities curve” in 1918 during the last major flu epidemic when cities with the most interventions were compared to the cities with the least interventions: 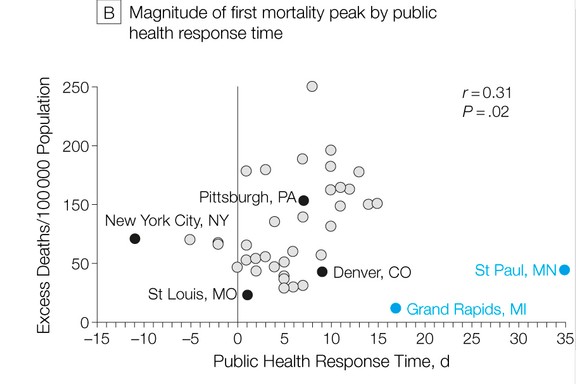 Note that the two cities that had the lowest public distancing (did the least interventions, and delayed the interventions the longest), also had the flattest curve!

Meanwhile, the city with the most interventions, New York City had a peak week fatality rate that was about double the rate of the cities that did the least intervention. Here is the exact information on these cities from the Appendix of this study: https://www.ncbi.nlm.nih.gov/pmc/articles/PMC1849868/bin/pnas_0611071104_index.html

So the truth about interventions and curve flattening is the exact opposite of what you have been told by the Mass Hysteria Media. If anything, social distancing interventions INCREASE the height of the peak cases curve and the peak fatalities curve. This means that social isolation also increases the load on hospitals.

The reason for this has to do with how the human immune system works. We will explain this dynamic after we look at a few more scientific studies on social distancing.

What’s Next?
As another example of how much you are being lied to, let’s take an even more blatant lie- the claim that shutting down mass gatherings will reduce flu outbreaks. I know this may seem hard to believe. But there is a mountain of evidence that mass gatherings of even 1000 people do not increase flu epidemics. So the idea that gatherings of more than 50 people should be restricted is basically ridiculous and not supported by any scientific evidence.