2.3 Flaws of the Ferguson UK Report

Ferguson made two glaring mistakes. First, he assumed the corona epidemic would take 3 months to reach a peak when it only takes 1 month. But much worse, he altered data on an earlier report to make it look like social distancing reduced fatalities in the 1918 epidemic – when in fact, it did not.

Many fear mongers point to a March 16, 2020 report written by Neil Ferguson with the Imperial College in the UK. Neil predicted that 2.2 million will die from the Corona Virus in the US unless drastic social isolation policies are enacted immediately. Actual fatalities now appear to be under 100,000. Ferguson was off by a factor of 20. 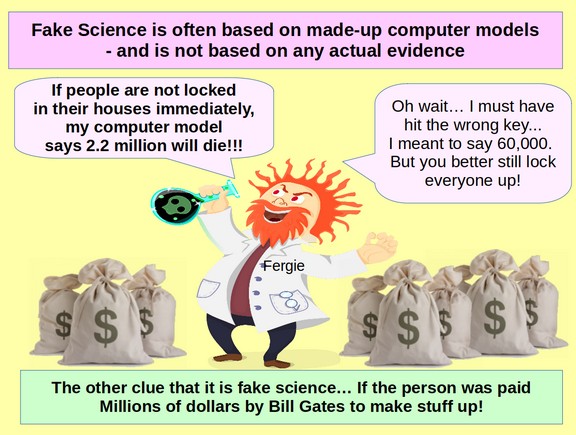 Ferguson and Imperial College were paid hundreds of millions of dollars to produce this junk science. This was not the first time Ferguson issued a completely inaccurate report. In 2001, Ferguson wrote a fake science report that was responsible for the unneeded death of six million animals during the 2001 Foot and Mouth outbreak. Ferguson claimed that 150,000 people could die. It turned out that only 200 people died. But killing six million farm animals costing the UK billions in farming revenue.

In 2005, Ferguson created panic in the UK during the 2005 Bird Flu outbreak. Ferguson estimated 200 million people could die. The real death toll was only a few hundred.

In 2009, another Ferguson report predicted 65,000 people could die from the Swine Flu outbreak in the UK. Less than 500 people in the UK actually died from the 2009 Swine Flu. https://blog.nomorefakenews.com/2020/04/30/the-british-corona-middle-man/

Thanks to his track record in using fake science reports to promote mass hysteria, Ferguson has been paid millions of dollars by the richest man in the world - Bill Gates. Because the Ferguson 2020 report was used to justify shutting down schools and businesses here in Washington state and because his report was based on flawed data, we will review it. Here is a link to this report: https://www.imperial.ac.uk/media/imperial-college/medicine/sph/ide/gida-fellowships/Imperial-College-COVID19-NPI-modelling-16-03-2020.pdf

Real scientists use actual evidence collected from the real world using transparent methods that can be independently verified by other scientists . Here is an example of real science.

Here are some quotes from this report: “The major challenge of suppression is it will need to be maintained until a vaccine becomes available (potentially 18 months or more) – given that we predict that transmission will quickly rebound if interventions are relaxed.”

“Cities in which these interventions were implemented early in the epidemic were successful at reducing case numbers while the interventions remained in place and experienced lower mortality overall . However, transmission rebounded once controls were lifted.”

Note that Neil Ferguson was also a co-author of the 2007 study he is now using to justify the claims made in his 2020 report.

As I explain in further detail below, the 2007 Ferguson study was extremely misleading because he “cherry picked” 16 out of 43 cities for which data was available – and the data from the cities he ignored actually refuted the claims he is now making! https://jamanetwork.com/journals/jama/fullarticle/208354

In a few minutes, we will look at how the conclusions get reversed when one considers the entire 43 cities rather than the 16 cities that Ferguson used. After falsely claiming that social isolation worked in 1918, Ferguson then argues that the only two options for the current crisis are suppression and mitigation.

Clue #1: Anytime anyone tells you that you only have two options on any problem, you should know that you are being set up. My experience in 20 years of teaching problem solving is that all problems have at least 10 options!

Ferguson then used a computer simulation to mimic social interactions of children and adults at four locations: households, schools, workplaces and community. He assumes an incubation period of 5 days and a doubling rate of 5 days. His rate of doubling is yet another error. Most scientific research has concluded that the rate of doubling is 6 days – not five days. This matters because over a 30 day period, a rate of doubling of 5 days will lead to twice as many fatalities as a rate of doubling of 6 days! See this link for research on the doubling period: https://www.thelancet.com/journals/lancet/article/PIIS0140-6736(20)30260-9/fulltext

He then concludes that after three months: “81% of the GB and US populations would be infected over the course of the epidemic.” This conclusion is also not supported by any scientific research.

The above study found that the actual incidents of the corona virus in Santa Clara CS was 50 to 84 times greater than the reported or confirmed incidence. This is why social isolation will never work. For every one person who is confirmed and isolated, there will be at least 49 more who have the virus but are not confirmed and therefore are out in the community spreading the virus to everyone they meet.

This result was supported by another study published on April 18, 2020 of a Boston Homeless Shelter. Here is the link: https://www.boston25news.com/news/cdc-reviewing-stunning-universal-testing-results-boston-homeless-shelter/Z253TFBO6RG4HCUAARBO4YWO64/

Of the 397 homeless people tested, 146 people tested positive. Not a single one had any symptoms. This result supports what I have known all along – that the corona virus – or any other flu virus - is capable of invading an entire population without anyone knowing about it – all due to the huge ratio of people getting the virus and passing it on to others without displaying any symptoms.

The real question, not mentioned in the study was why the percent testing positive was not 100% or all 397 homeless people. I believe the answer is not that they were not exposed – or had practiced social isolation. The real answer is that the people who did not test positive had been exposed to the virus. But their immune systems were strong enough to fight off the virus without them actually getting infected.

A reasonable question is why so many more people are infected in some countries than in others? The problem with this question is that due to the lack of accuracy of the tests, there is really no one of knowing the real percent in each country. What we can know is that each country reached a peak in about 30 days and declined thereafter. Also, no country went over 50%.

Yet despite all of these facts, Ferguson had the audacity to claim an 80% infection rate in the US and UK – with not a single example to support it.

Ferguson then goes on to predict “approximately 510,000 deaths in GB and 2.2 million in the US, not accounting for the potential negative effects of health systems being overwhelmed on mortality.” Here is the Ferguson graph showing how these 2.2 million deaths in the US will occur. 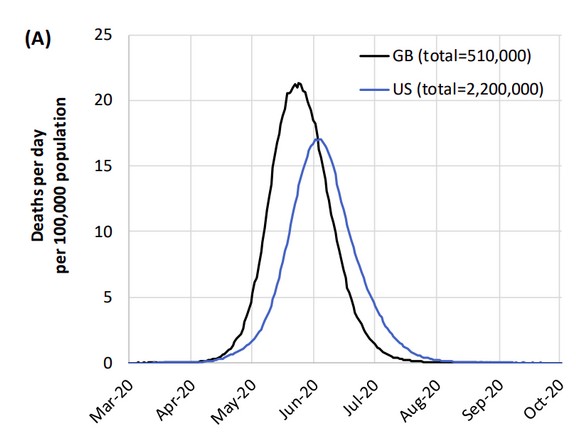 As noted earlier, there is a huge and glaring problem with this graph. Ferguson claims the Corona virus will take 3 months to reach a peak. This is completely contrary to what happened in China and South Korea where it took just over one month to reach the peak. This error alone explains how Ferguson was able to come up with such an extremely high number of fatalities. He just kept letting the curve double and double beyond all reason.

Ferguson also predicts that the demand for Intensive Care Unit beds would be 30 times greater than the available supply in either the UK or the US. We will see shortly that this prediction is also ridiculous.

He also states: “To avoid a rebound in transmission, these policies will need to be maintained until large stocks of vaccine are available to immunize the population – which could be 18 months or more… We therefore conclude that epidemic suppression is the only viable strategy at the current time.”

Ferguson’s claim that we will need to stockpile vast amounts of vaccine and immunize the entire US population against the corona virus before we can return to normal borders on lunacy. Not only do flu vaccines have a very poor track record (as we will review below), but even if a vaccine did work, it would not stop the corona virus because the virus would simply mutate into a new strain. So the entire effort of creating a vaccine would be a complete waste of time and waste of billions of tax payer dollars – not to mention the trillions of dollars lost from shutting down schools and the US economy for the next 18 months.

Yet on March 16, 2020, Washington State Superintendent of Public Instruction went on KIRO radio and announced that was exactly what he intended to do – enforce extreme social isolation policies including converting all schools to an online model for an entire year – until a vaccine was ready and then force the vaccination of the entire population of Washington state before we can return to normal!

It was these insane statements from Chris Reykdal on March 16 2020 that led me to publish this book.

Keep in mind that none of Ferguson’s conclusions are supported by the 43 city analysis that he piggy-backed off of in creating his own 16 city analysis which in turn he used as the basis of his estimates.

What was most shocking about the 2020 Ferguson report is that he did not list the 2007 JAMA 43 city study in the References section of his 2020 report or his 2007 report – even though his cherry picking of data was taken from the 2007 JAMA report. This is extremely dishonest. Yet this deeply flawed report was the report which led to the closure of all schools and businesses in Washington state.

We will later take a deeper look at the real 2007 JAMA report which reveals a much different story about the lack of effectiveness of extreme social isolation policies. First, we will look at how to better estimate the time to peak. These more accurate estimates show that the time to peak has already been reached.