7.3 Why School Opening should not wait for a Miracle Vaccine

You can not just wave a magic wand and suddenly all children will do OK with online programs.

The issue we will address in this article is why public schools should not continue to remain closed for the next school year.

On Monday, April 6, 2020, Governor Jay Inslee and Superintendent Chris Reykdal held a press conference at which they announced that schools in Washington state would remain closed for the rest of the school year. Therefore more than one million students in Washington state are now certain to lose nearly 4 months of learning – March, April, May and June. This is already by far the longest statewide school closure in the history of our state.

During the press conference, Inslee first said schools are expected to reopen in the fall. But later, Chris Reykdal stood beside Inslee and stated that “school leaders should prepare for the possibility that closures may bleed into fall.”

The next day, on a local radio show, Reykdal stated that he might wait for a vaccine to be developed: “Short of a vaccine, which people continue to tell us is 12-18 months away, we have to figure out if it’s safe to come back even in the fall. Will we see a spike in cases if we are all sort of released from our social distancing framework?”

“If 25 or 30 kids are put back into a classroom in close quarters, and someone has the virus, it’s going to spread again very rapidly. Then schools would have to close to be cleaned, and there would need to be an effort to conduct contact tracing.

So if that looks too dysfunctional, if not enough of us have gotten the virus and built the antibody, or we don’t have a vaccine, the return to schools are really tough considerations right now. We have a lot of science working hard to figure it out, but I already have to start thinking about how to continue to strengthen our online model.”

What Reykdal is saying is that if the virus comes back again in the fall, he will simply shut down schools again.

There are are at least seven major errors in Reykdal’s dangerous reasoning.

#1 There is no “science” that supports what Reykdal is doing.

#2 Social Distancing does not reduce the transmission of any viruses.

#3 If there is a “double bounce” in the fall it will be because his social isolation policies of shutting down schools and businesses prevented people from building up immunity to the corona virus.

#4 Flu vaccines are not effective.

#5 Closing schools has never been effective in reducing flu transmission. Kids may be less at risk in schools than at home.

#6 Online programs do not work for most kids, in most school grades and in most subjects and most learning styles.

#7 Failure to provide ALL children with an education is a violation of the Washington State Constitution.

#1 There is no “science” that supports what Reykdal is doing.
In his statements, Reykdal claims to be following the science. The problem is that he has never referred to a single scientific study that might support what he is doing. There is just some sort of magical science out there. By contrast, I have provided hundreds of scientific studies – all of which show beyond any reasonable doubt that everything Reykdal thinks is true is not actually true. The people of Washington state counted on Reykdal to do at least some basic research before harming our one million school children. Reykdal failed to do this basic research.

#2 Social Distancing does not reduce the transmission of any viruses.

We had an entire chapter on this subject. Reykdal made two huge errors here. First, Reykdal made a fool out of himself when he quoted a Neil Ferguson believing his ridiculous claim that “more than 2 million people will die from the corona virus in the US in the next few months.”

But instead of realizing that Ferguson does not know what he is talking about, even after Ferguson admitted that he got it all wrong, Reykdal believed Ferguson’s claim that social distancing reduced transmissions during the 1918 Spanish Flu. Reykdal clearly never bothered to look at the actual research about social distancing in 1918 that leads to the exact opposite conclusion.

#3 If there is a “double bounce” in the fall it will be because his social isolation policies of shutting down schools and businesses prevented people from building up immunity to the corona virus.

This one is going to require some explanation. In 1918, the Spanish Flu experienced a larger second bounce in cities that did the most social isolation. The main deadly flu outbreak started in October and ended by December. The social isolation policies like closing schools and banning meetings in some cities went on for about four weeks – from mid-October to mid-November.

The double bounce or second wave started in January of 1919 and went on until the end of February at which time everyone became immune to the Spanish Flu and it dropped into the background of what we now call the seasonal flu. The key thing about the second wave is that it did not kill anywhere near as many people as the main hit – which killed about 4000 people in Washington state.

The second bounce in 1919 only killed an extremely small fraction of the first wave in the fall of 1918. But in places that did not impose social distancing, the 1919 second bounce did not even happen.

This difference in double bounce fatalities occurred not only in Washington state but also in stated and cities all across the nation. I studied all 43 cities and the pattern was quite predictable. Double bounces only happen in cities that demanded social isolation of shutting down schools and banning mass meetings. Note that no where in the US were more than a few businesses shut down.

For reference, the claim is that the corona virus has killed 491 people in Washington state as of April 12, 2020. Because of the way many of these death certificates were forged as required by the newly changed CDC requirements, I believe that the actual number of fatalities is about half of the reported number or about 250.

Because Inslee and Reykdal have used social isolation in the entire state of Washington that are many times more draconian than anything that was done in 1918, it is almost certain that the second wave or double bounce will be much larger than anything that happened in January 1919.

Assuming that the Inslee allows businesses to re-open in June, and because the human immune system works very well in the summer, I expect that the double bounce will not start until the sun goes away and the rain returns in October. No doubt school nurses will be required to run the inaccurate antibody tests on students and there will be massive numbers of false positives – even though most kids will actually not be infected by the corona virus and none of the kids in any of our schools will actually be at any risk of dying. By October, there will be some corona viral fatalities in densely populated communities – mainly at senior centers in King County. Once this happens, Reykdal will once again close the schools and Inslee will likely close businesses again and our students and their parents will be subjected to the same nightmare they are going through right now.

#4 Flu vaccines are not effective
This is one of Reykdal’s biggest errors. It does not take much research to understand that flu viruses never have worked and never will work. But Reykdal talks about a miracle vaccine at nearly every press conference. Nevertheless, after Reykdal closes the schools perhaps in October 2020, it is likely they will remain closed and we will be back to the online learning nightmare until some drug company gets approval for a miracle vaccine.

This is when the real danger to our students will begin. These new Super Vaccines are likely going to be much more powerful and much more dangerous than any vaccines that have been thus far inflicted on our kids. Our one million children will be required to be the test victims for these super vaccines that will be rushed to market without hardly any testing.

Remember that law that prevents parents from suing drug companies after their vaccines harm the kids?

I am a huge believer in the importance of public schools. But if I had to choose between giving my child an untested and dangerous vaccine or keeping him or her out of the public schools, I would keep my student out of school.

I predict that within a year, the drawbacks of the new super vaccines will become painfully obvious and they will be withdrawn. But kids who are forced to take these vaccines may suffer an entire lifetime of damage from the vaccines. As bad as online programs are, they are better than exposing your child to a deadly untested vaccine made by a drug company that can never be sued.

#5 Closing schools has never been effective in reducing flu transmission. Kids may be less at risk in schools than at home.
Certainly the grandparents will be less at risk of the kids are in school rather than being cared for by the grandparents. But in fact, there is no rational reason for closing schools due to the corona virus. The fact that Reykdal does not realize this and has not been informed of this fact by any member of his staff really makes me wonder what they are doing with their free time down in Olympia. 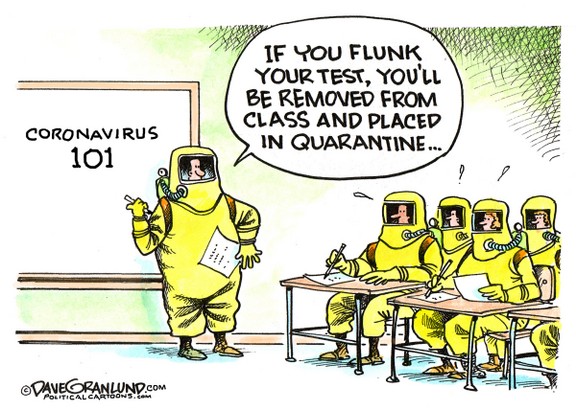 #6 Online programs do not work for most kids, in most school grades and in most subjects and most learning styles.
We just covered this problem in the previous section. There is no solution to this problem. You can not just wave a magic wand and suddenly all children will do OK with online programs. In fact, online programs only work with older students, who have internet access and good computers and who have a linear learning style. Even then, it only works with certain subjects like math and science where there are only a few right answers to each question.

#7 Failure to provide ALL children with an education is a violation of the Washington State Constitution.

Washington state has a very unique state constitution. It is the only constitution in the nation where the education of all students is the Paramount Duty of the State.

Reykdal seems to think that educating students is secondary to keeping them safe. But that is not what the law says. It says you need to keep them safe AND provide all of them with an education.

Here is what the Washington state constitution says: 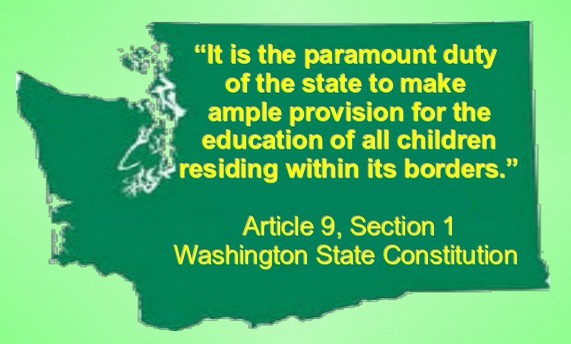 Moreover the word all children means all children. Not merely rich students who have laptops and high speed Internet access and have a learning style that can tolerate online programs.

What’s Next?
Now that we understand the danger that our current leaders pose to our or kids and our education system, in the next chapter, we will look at the harm they are inflicted on our families and businesses.