Is Yakima Overwhelmed by the Corona Virus or by something else

On June 20, 2020, Washington Governor Jay Inslee held a press conference claiming that Yakima was being overwhelmed by the corona virus. Given that in the past, Inslee claimed 2 million people would be killed in the US by the corona virus – and that hospitals in Washington state would be overwhelmed by the corona virus, it is amazing to me that anyone still believes anything this guy says. For those with short memories, here is a picture of the 250 bed emergency military hospital that was built in downtown Seattle at a cost of millions of dollars a couple of months ago to handle the overflow of what Inslee predicted would be a tidal wave of corona virus patients: 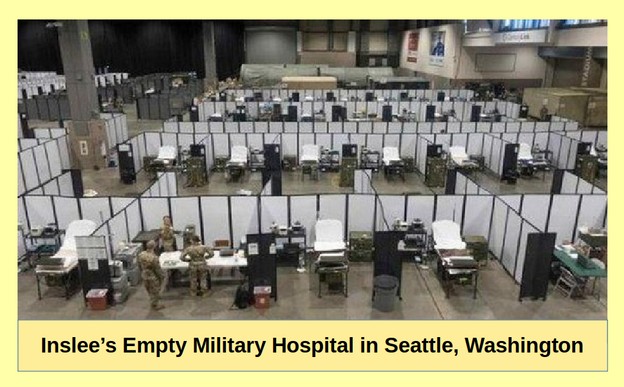 This expensive emergency hospital was closed in less than one week after not getting a single patient. It turned out that Inslee was completely wrong. Only one hospital in King County exceeded capacity. Evergreen hospital in Kirkland sent a couple of patients to Harborview in Seattle. Corona hospital admissions in Washington state never exceeded 7% of hospital capacity.

This report confirmed that Washington State daily admissions never exceeded 80 people per day in the entire state. Even this maximum rate occurred in early April and quickly fell back down to less than 40. 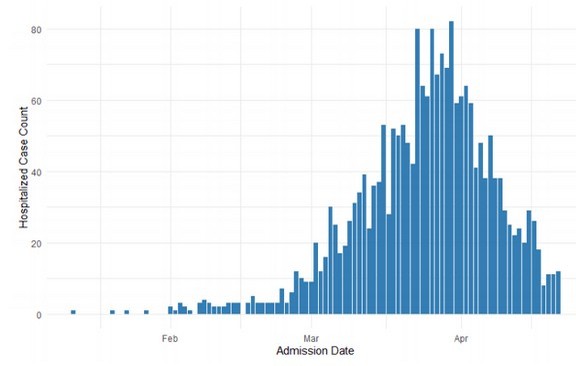 This is 40 daily corona hospital admissions in a state that has 7.5 million people. King and Snohomish counties alone have more than 5,000 staffed hospital beds and more than 1000 critical care units. It is therefore no wonder that we did not need the 250 bed emergency hospital than Inslee had built in Seattle. 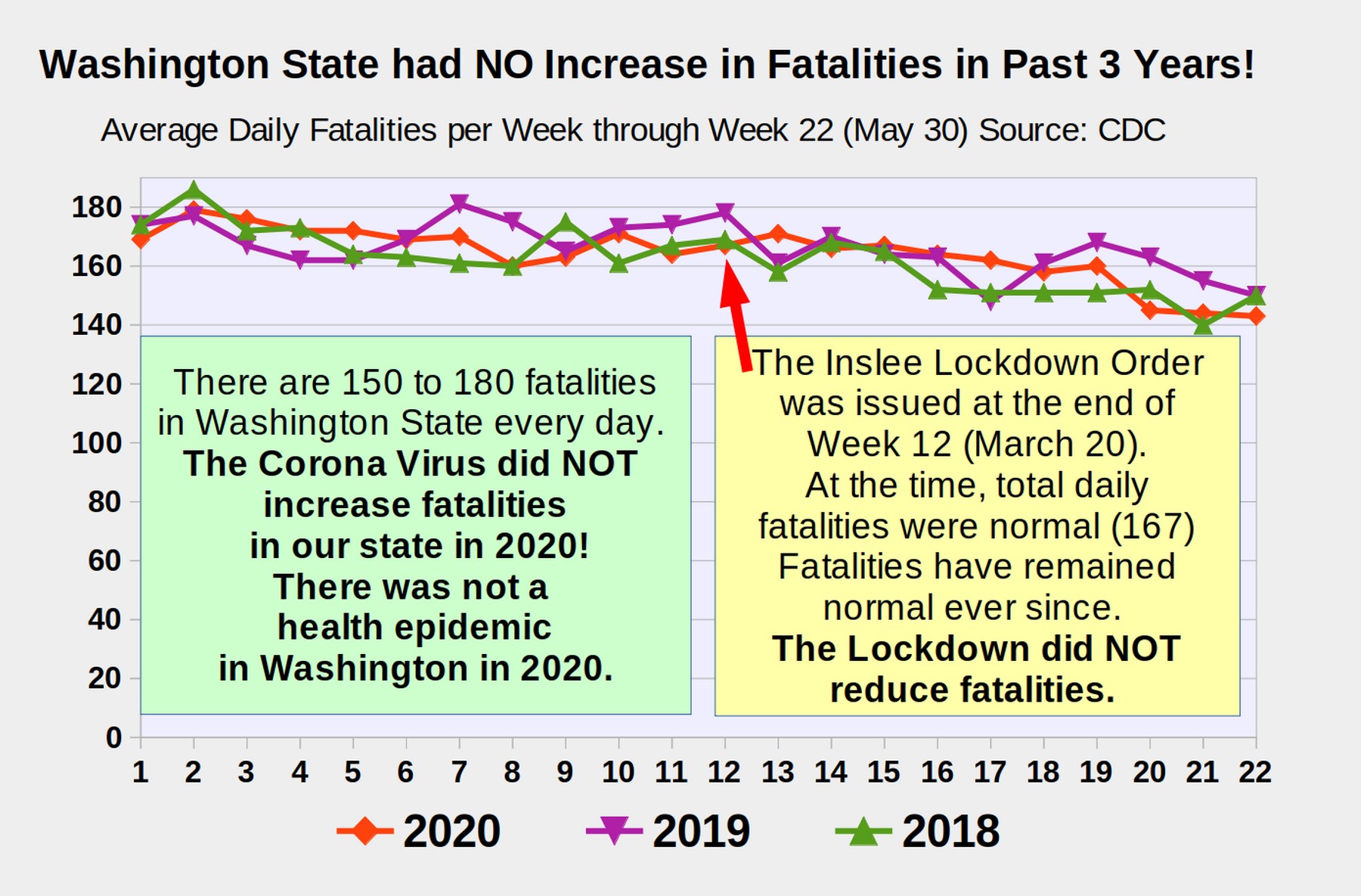 Washington state fatalities have remained normal at about 170 per day for all 3 years. Here is a link to the data table used to create this graph: To see CDC State data, go to this link: https://www.cdc.gov/nchs/nvss/vsrr/covid19/excess_deaths.htm

Scroll down to Options and click on the link called Data.CDC. gov National and State estimates. Then click on View Data. Then click on State, Sort Descending. Then click Next about 20 times to get to Washington State.

But instead of apologizing to the public for his past ridiculous blunders, Inslee held yet another press conference to push more corona virus hysteria on the public – with the blind acceptance of the corporate media. This time Inslee made several more scary claims including:

#1 Yakima has the highest rate of corona than anywhere in the western US.

#2 Yakima has as many corona cases as the entire state of Oregon.

#3 26% of the corona tests in the Yakima Valley were positive.

#4 19% of hospital beds in Yakima are occupied by corona patients versus 2.5% in the rest of state.

#5 10% of all corona deaths in Washington state are in Yakima.

#6 Yakima ICU patients are being transferred to Seattle.

#7 Cases in Yakima could double in the next two weeks.

#8 The number of patients requiring hospitalization in our state could double in the next two weeks.

Inslee then brought in Dr. Tanny Davenport from Yakima Valley Virginia Mason Memorial Hospital who naturally agreed with everything Inslee said. Davenport stated that Yakima had 208 new cases, 42 hospital patients with corona and 11 of them were on ventilators. An additional 22 people were transferred out of their Yakima hospital to Seattle because “we did not have enough people to care for them.”

Inslee then came back on and stated that “We will be swamped with a tidal wave of covid 19 if we do not act.” He is therefore ordering that all businesses in Yakima require masks on all of their customers. Inslee called it “No Mask No Service Mandatory Order.”

Inslee then explained that new research supports the effectiveness of masks. Sadly, he did not provide a link to this new research. Nor did Inslee explain how cotton masks can stop a virus that is 1000 times smaller than the pore size of cotton masks.

Inslee concluded his corona fear fest with John Wiesman, Secretary of Health who urged families to not have Fathers Day Barbecues – apparently because he feared that these Sunday barbecues could lead to mass fatalities.

Comparing Inslee’s Hysterical Claims to Actual Facts
Just by coincidence, I have been doing a lot of research on corona cases in Yakima County during the past few weeks in an effort to better understand why Yakima county has a much higher rate of positive cases than the rest of our state. So let’s compare Inslee’s claims to the actual facts by looking at real data.

Here is the most reliable data as of June 15 from the Washington state Department of Health dashboard (recognizing that newer data is subject to change). The following table has corona information from the 10 most populous counties in Washington state so you can see what is happening not just in Yakima County but in several counties. The table also includes Oregon state (since Inslee tried to compare Yakima County to Oregon in his press conference). What is obvious is that Oregon has had very few Corona cases or fatalities. Oregon is very similar to Clark County which is near Oregon. 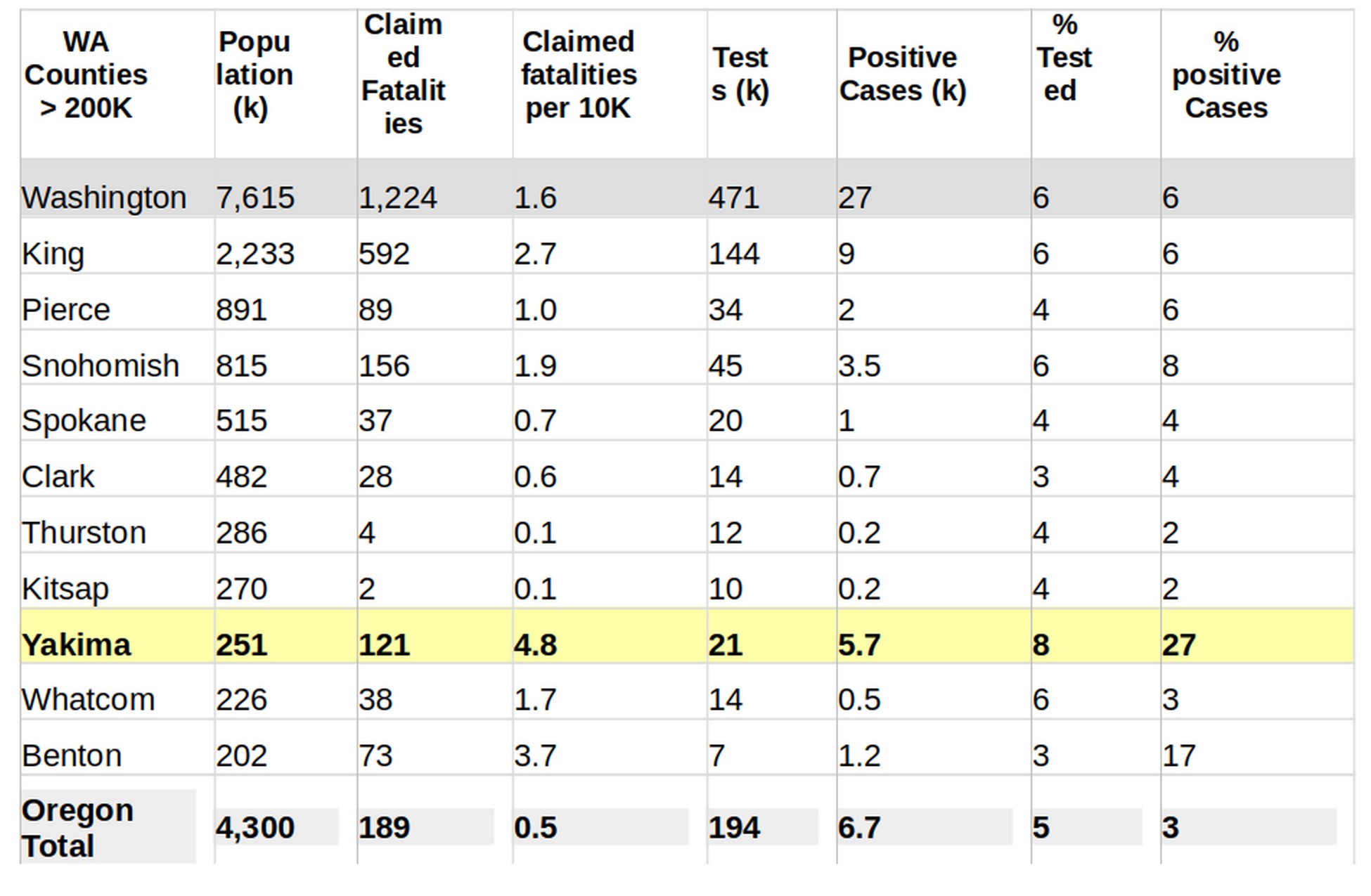 Meanwhile, Yakima County has ten times the number of fatalities per 10,000 cases and has almost ten times the percentage of positive cases compared to either Oregon or Clark County. Out of just under 6000 positive cases, Yakima county has seen 436 hospitalizations and 131 fatalities as of June 20, 2020. This means that 30% of the people who went to the hospital in Yakima County with the corona virus eventually died.

Certainly, Jay Inslee must know this. So it was extremely dishonest of Inslee to try to compare Yakima county to Oregon when – as I explain in detail in my book, the best predictor of any flu fatalities is the region in which the fatalities occurred. Oregon is not the same as Yakima County.

Here are hospitalizations in Washington state over time:

The maximum was 80 per day and has dropped down to about 20 per day. Here are hospitalizations in Yakima County over time:

The maximum was 10 per day and has not dropped. In fact, it has been going up. So Yakima is now about half the total hospitalizations in the state.

The maximum was 30 per day and is now well under 10 per day. Here are fatalities in Yakima County:

The maximum was 6 per day back at the beginning of April. So this large percentage of fatalities has been happening in Yakima county for three months – and now represents about half of the fatalities in our entire state. But instead of recognizing that this is a problem unique to Yakima county, Inslee is claiming it is some sort of recent outbreak of the corona virus. This claim simply does not match up with the facts.

One possible candidate is farm workers being exposed to excessive levels of pesticides as pesticides (and all other poisons) are certain to harm the human immune system. Here is a link to an entire website devoted to researching this problem: 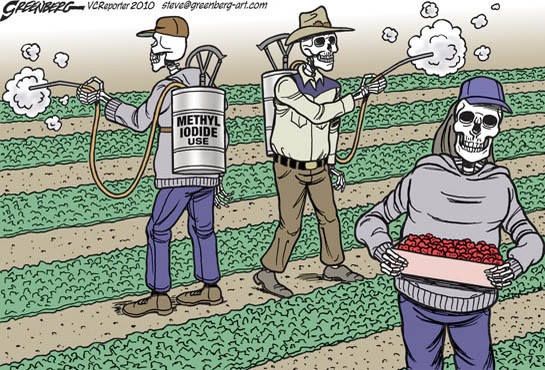 To be clear, I am not saying that pesticides are the only problem. What I am saying is that there must be one or more factors present in Yakima and Benton Counties that are not present elsewhere in Washington state that are causing the human immune system to be weaker in these two counties than anywhere else in Washington state. It could be something in the water, in the food or in the air. But there is something that is causing this problem. -And that something is not simply the corona virus – because in other places in our state with similar exposure to the corona virus, this high level of fatalities is not happening.

Instead of trying to actually try to find out what is the real underlying cause of this problem, Inslee is instead ordering everyone in Yakima to start wearing masks. I have already posted an article explaining why masks can not possibly stop or even slow down the spread of the corona virus. You can read it at this link:

The pores in cotton masks are simply way too large to stop any viruses. Also only a very small percent of virus transmissions occur in public places. So Inslee’s Mandatory Mask order will do nothing to reduce fatalities in Yakima or Benton counties. Masks do about as much good as handing a band-aid to someone who is suffering from a heart attack.

It is likely that most of the people in Washington state have already been exposed to the corona virus. As I noted in previous articles, about 50% of people already had T cell immunity due to exposure to previous cold viruses. Thus, the problem is largely over in most of Washington state.

But it is clearly not over in Yakima and Benton counties. The problem they are experiencing is not a corona virus problem as the virus has spread and will continue to spread throughout the state without anywhere near this rate of fatalities. The problem faced by the people of Yakima county is a weakened immune system problem – most likely caused by some toxins that are not present elsewhere in the state.

This is a perfect example of why we need to seek out the real causes of problems. Sadly, Inslee is so blinded by his obsession with the corona virus, that he is unable to see that the real problem is a local problem rather than some corona virus outbreak. Because of his blindness, absolutely nothing is being done to address this real underlying problem. As I explained to my students during my 20 years of teaching courses in Problem Solving at Bellevue College, if one does not take the time to seek out the real causes of a problem, there is no hope of coming up with an effective solution.