Increased Corona Cases are due entirely to Increased Testing

On July 2, 2020, the Institute for Data Modeling (one of dozens of fake front groups funded with millions of dollars by Bill Gates to use fear to control people) released yet another scary report predicting imminent doom if people do not change their ways. Here is a quote from their report: “Continuing along this trajectory will lead to catastrophic outcomes.” Based on this scary report, the very same day, Washington Governor Jay Inslee announced a new statewide emergency order requiring businesses to refuse service to patrons not wearing masks. Inslee also announced a statewide pause on county phase progression. 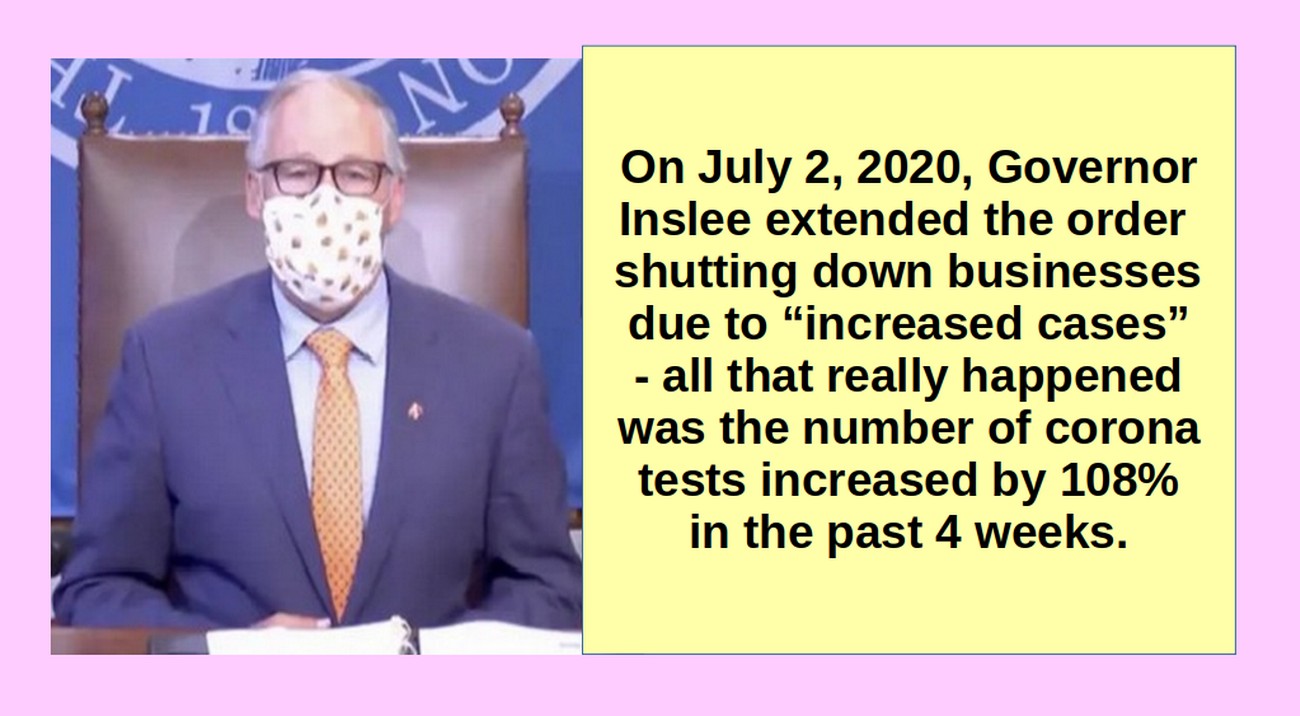 Inslee’s Mandatory Mask Order took effect on July 7, 2020. Inslee held another press conference during which he pointed to this graph noting that on July 6, 2020, there were more than 1000 new corona virus cases: 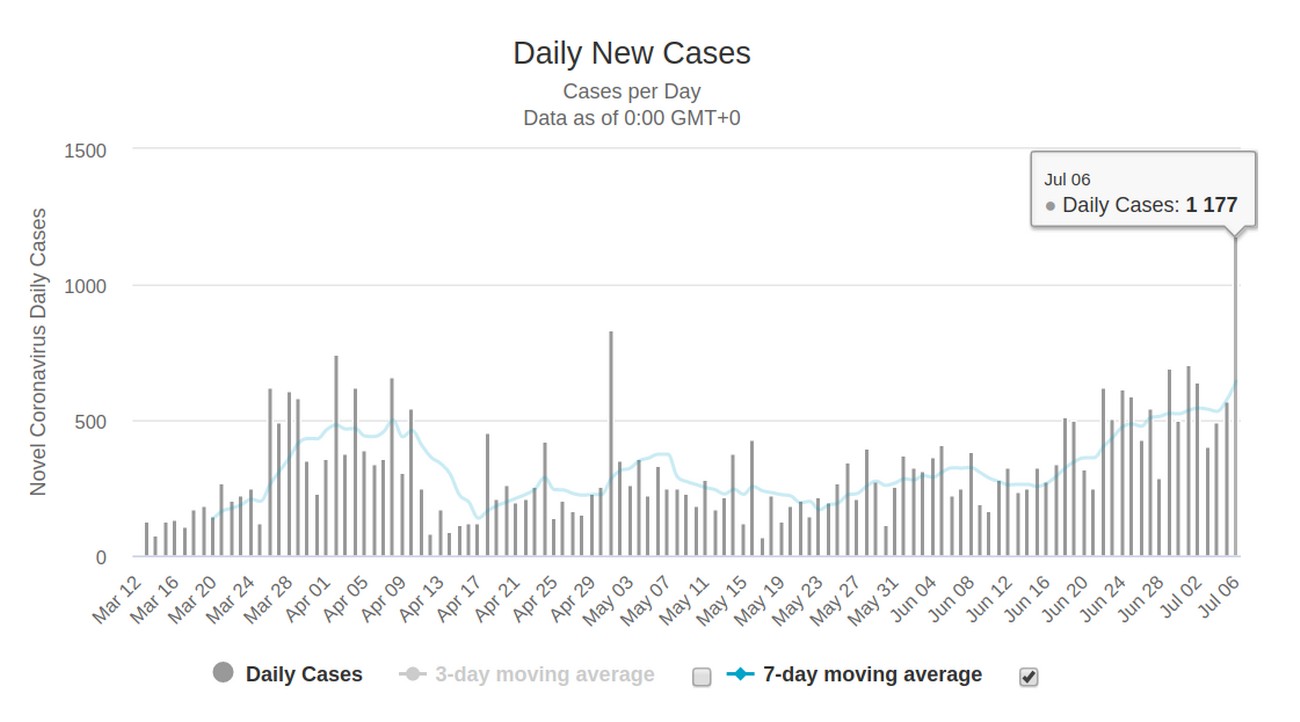 So are we really heading for a wave of new corona fatalities??? 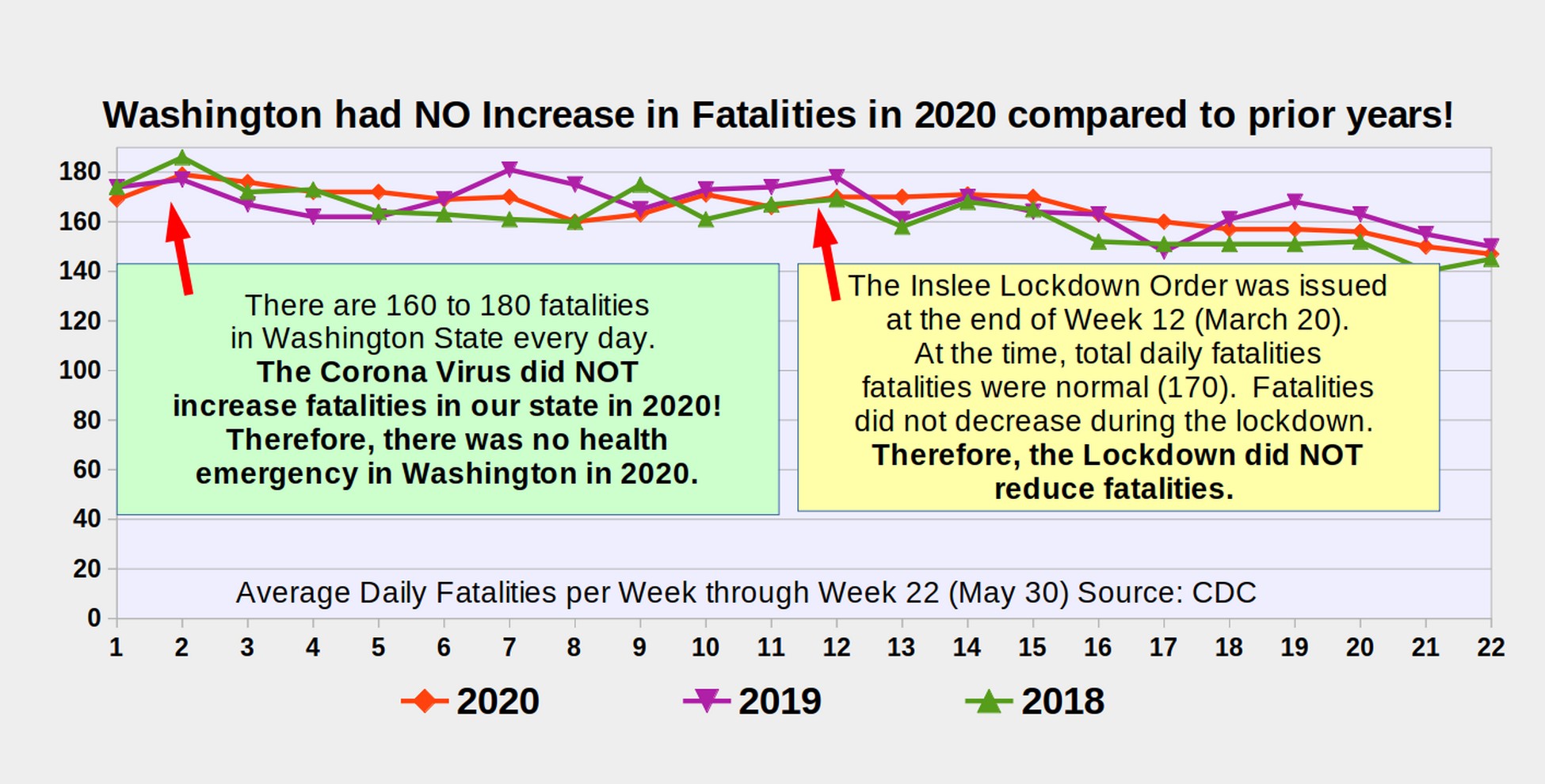 The graph is through May 2020. So the question now is whether there has actually been any increase in the danger of the corona virus during the month of June 2020 - or simply an increase in the number of tests being given. Keep in mind that the test themselves are extremely inaccurate with huge numbers of false positives and false negatives. Therefore, while the total number of tests is likely to be accurate, the percentage of positive tests is not likely to accurate – it could be much lower or much higher. Here is a link to the Washington DOH Corona Dashboard: https://www.doh.wa.gov/Emergencies/NovelCoronavirusOutbreak2020COVID19/DataDashboard

Here is a graph of the number of Corona tests given each day since March.

Yet during his press conference on July 7, 2020, Inslee claimed just the opposite – that the percentage of positive tests is going up (which is actually what we would expect as the corona virus, like all viruses, eventually spreads through the entire community over time). We will get to some possible reasons why the percentage of positive cases might go up or down in a moment. First, let’s take a closer look at the testing data for the month of June.

Here is a graph of the increase in tests per week for the four weeks in the month of June 2020 in Washington state: 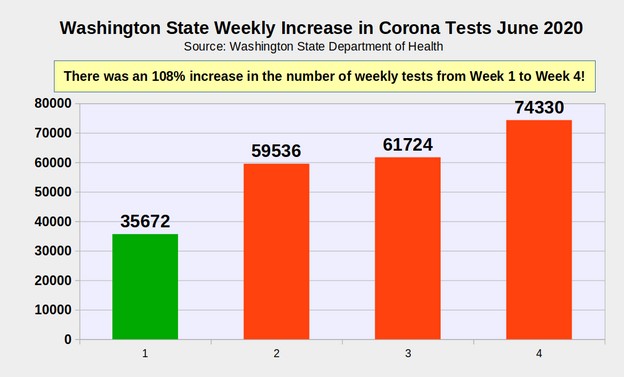 At the same time that there was an 108% increase in the number of tests, the percentage of positive tests fell from 6.0 percent in May to 4.8 percent for June – a decrease of 20% from May 2020 to June 2020. Here is a graph of Weekly Percent Positive Tests in Washington State in June 2020: 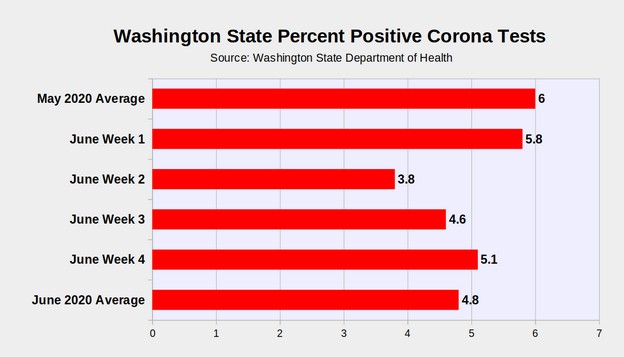 So why did Inslee issue an emergency order on July 2, 2020? And why did Inslee claim on July 7, 2020 that the percent of positive tests has gone up when in fact it has gone down? 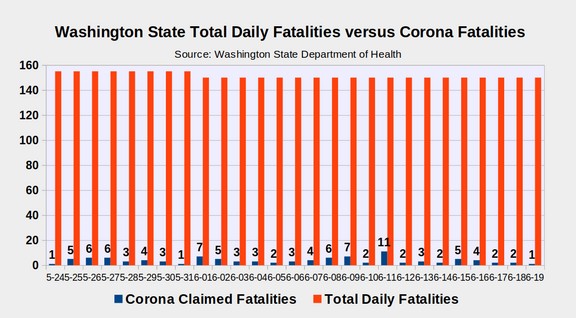 You can see that for more than one month, corona fatalities have been an extremely small fraction of the 150 fatalities we have in Washington state each day during every June. The daily average of corona fatalities has been under 10 for more than one month. Keep in mind that almost none of these claimed corona fatalities actually died from the corona virus. Nearly all of these victims had many other serious medical problems. And most of them were elderly people over the age of 80 who never left their homes. It would be more accurate to say that these people died “with the corona virus” rather than “from the corona virus.” There was not an emergency in March 2020 and there is certainly not a health emergency right now.

If you would like to double check my calculations, here is a table of positive tests, total tests and % positive tests June 2020:

How can the Percent of Positive Cases be going down when the Corona virus is clearly spreading throughout our community?

The key to resolving this problem involves understanding what is actually being tested when a person takes a corona virus test. The so-called Antibody Test is not a test for the corona virus. Instead, it is a test for Antibodies believed to be present after a person has been infected by the corona virus. I have reviewed this problem in Section 5.4 of my book, Common Sense versus Corona Virus Hysteria which you can read for free at the website Common Sense Book dot org. Here is a direct link to this section of the book: https://commonsensebook.org/part-ii-viruses-and-our-immune-system/5-why-corona-virus-tests-are-not-accurate/5-4-why-corona-virus-antibody-tests-are-not-accurate

Here are a couple of quotes from this section: “We now have at least 90 (antibody) tests on the market, and we don’t know about the accuracy of the results… Having many inaccurate tests is worse than having no tests at all.” Dr. Kelly Wroblewski April 16, 2020

Antibodies are specific proteins made by the immune system in response to infections. One antibody test was found to be accurate just 30% of the time. https://www.businessinsider.com/coronavirus-antibody-test-g7-leaders-accuracy-covid-19-immunity-passports-2020-4

PCR tests are known to be so insensitive that they are not able to make an accurate determination until several days after a person has been infected. It is common for a person to test negative when they first come into the hospital and continue to be tested negative for several days before there is enough virus in their system to get a positive result. People need to be told the truth about PCR. You can get a negative result and still have Corona virus. You can also get a positive result and not have the Corona virus!People have had up to six negative results before finally being a positive result. https://www.bbc.com/news/health-51491763

The underlying problem with PCR is that it can pick up viral genetic material only if there’s a lot of it. And early in an infection, (or in the case of asymptomatic carriers) before someone starts to feel really sick, there’s often not enough genetic material (RNA) to be picked up by the test. This failure to pick up enough genetic material is one reason why researchers from Stanford have concluded that the actual number of corona virus cases is many times the reported number of cases.

But what has caused PCR tests to become even LESS ACCURATE in June than they were in May is likely the strengthening of the human immune system during the month of June. A stronger immune system is better able to recognize and attack the Corona virus early in the disease – resulting in much less corona virus material to be picked up by the PCR test. In plain English, it is very possible that the actual number of corona virus cases is rising even though the percentage of positive tests is falling.

Second, even if transmission did occur in businesses, it would not cause an increase in fatalities – because the corona virus is no more lethal than the seasonal flu. 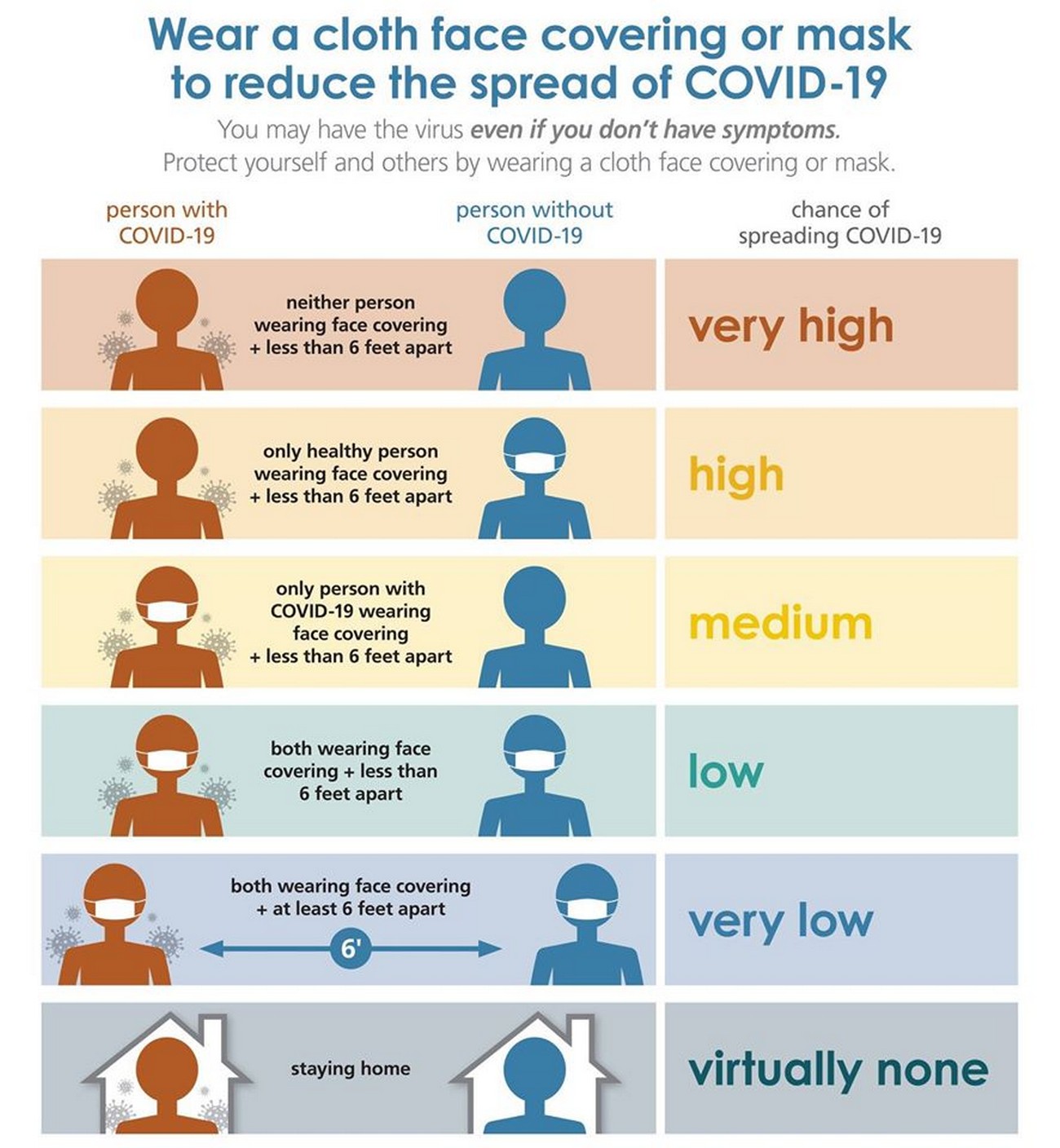 In fact, recent studies have shown that corona virus aerosols – which pass easily through masks – can spread through a room 30 feet wide in under 20 minutes.

These aerosols can even spread from one room to another through building air ducts. The only way to disperse these viral laden aerosols is to go outside in the fresh air or open windows to let the outside air in. So neither wearing masks nor remaining 6 feet apart does any good. Here is a link to a video showing the spread of corona aerosols. Here is a link to a study that found viral laden aerosols can travel up to 25 feet: https://jamanetwork.com/journals/jama/fullarticle/2763852

Here is a link to this YouTube video showing the same transmission (see Minute 5): https://www.youtube.com/watch?time_continue=2&v=LLzMDvzWeV8

Equally wrong, the Department of Emergency Management graphic claims that the chances of spreading the corona virus is very low inside of private homes. In fact, a study in New York confirmed that 86% of all cases were transmitted inside of homes where masks are not required - rather than in public spaces where masks are required.

So why did Inslee issue an emergency order on July 2, 2020 continuing the shutdown of businesses when daily fatalities caused by the corona virus have been close to ZERO ever since the middle of May?
This is like asking why Inslee shut down our schools and businesses in the first place. Corona virus hospital admissions had fallen by 50% BEFORE Inslee shut down our economy! It could be that Inslee is surrounded by people who have managed to convince him that there is an emergency – even though there has not been any increase in fatalities in 2020. One only needs to watch a main stream news programs on TV to see how much propaganda and brain washing people are being subjected to.

One thing is certain, the more time goes along, the more people will begin to open their eyes to the truth. When they do, they will see that the corona virus has been almost a corona cult – deceiving people by the millions – as the real problem is that millions of people have lost their jobs – and may soon even be homeless.